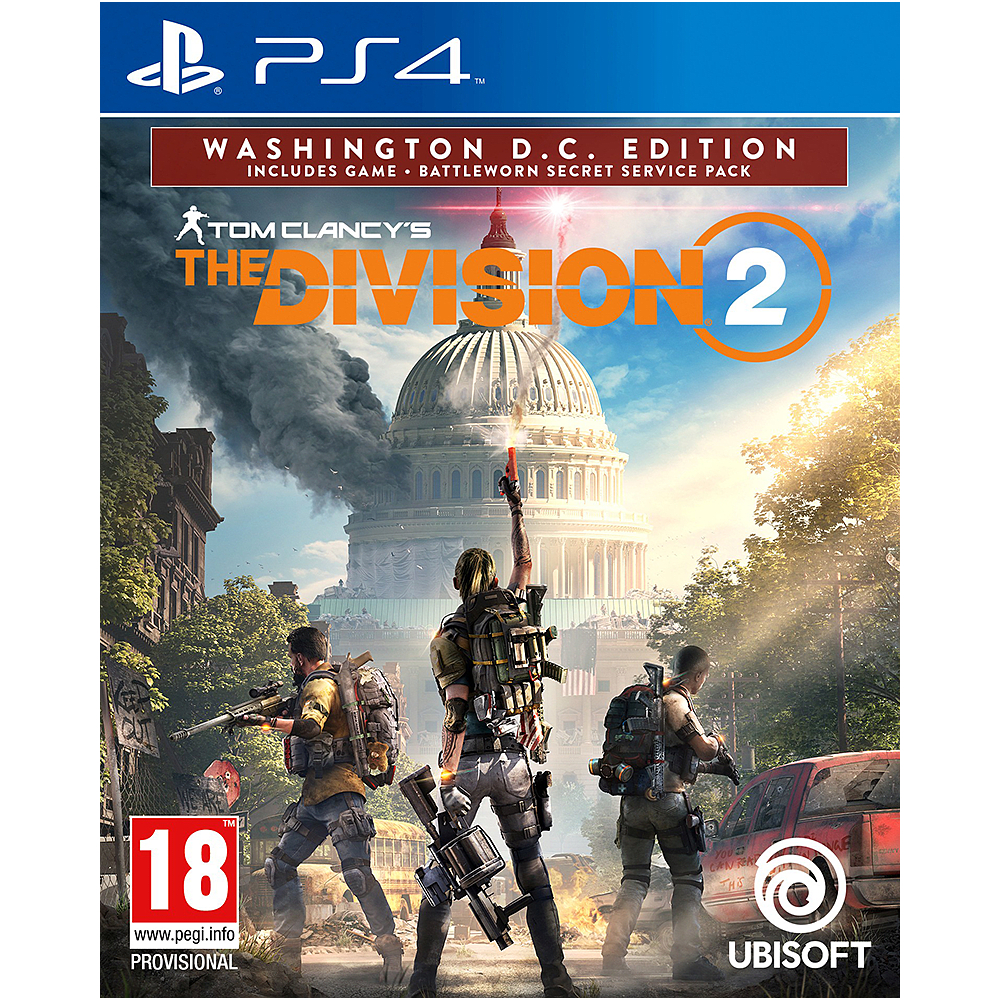 It comes up at £16.99 online however you can check the store price which is £9.99 bt using the click and collect option and putting in your postcode. my local had lots of ps4 versions. just bought one. the extra content is pretty swish. Xbox is same price but looks like sold out near me. Hope this deal helps someone. The base game is £10 pre-owned at CEX

The Division 2: Washington D.C Edition features additional content worth £20. See below for details.


Seven months have passed since a deadly virus hit New York City and the rest of the world, crippling the population. When the virus hit, The Division, a unit of civilian sleeper agents, were activated as the last line of defence. Since then, Division agents have been fighting relentlessly to save what remains.

For The Division, the stakes are higher than ever. Washington, D.C. – the most heavily protected city on earth – is at risk, leaving the entire nation on the brink of collapse. If Washington, D.C., is lost, then the nation falls. As a Division agent who has been in the field for seven months, you and your team are the last hope to stop the fall of society after the pandemic collapse.

Developed by Ubisoft Massive and the same teams that brought you Tom Clancy’s The Division®, Tom Clancy’s The Division® 2 is an online open world, action shooter RPG experience set in a collapsing and fractured Washington, D.C. This rich new setting combines a wide variety of beautiful, iconic, and realistic environments where the player will experience the series’ trademark for authenticity in world building, rich RPG systems, and fast-paced action like never before.

WASHINGTON, D.C. EDITION CONTENT
Gear up and free the city from its lawbreakers with The Washington, D.C. Edition. This edition includes:

Physical content:
The Tom Clancy's - The Division® 2 Game in a premium slipcase with an alternative Key Art specially designed for this edition.A Washington, D.C. Map with a ton of information and secret locations left behind by another Division agent.A Book of Lithographs with a selection of detachable lithographs, including twenty of the greatest pieces of art from the game.

Digital Content:
The Battleworn Secret Service Pack: don't get caught, be sneaky and collect information to defeat DC's enemies with your secret service outfit, an exotic M4A1 weapon skin and a rare emote.
PostTweetShare Share with WhatsApp Share with Messenger
Community Updates
GAME DealsGAME discount code
If you click through or buy, retailers may pay hotukdeals some money, but this never affects which deals get posted. Find more info in our FAQs and About Us page.
New Comment Subscribe Save for later
11 Comments
3rd Jan
Get prepped for World War 3 for £10!
3rd Jan
Still saying £15.99 on click and collect?
3rd Jan

Says 9.99 for me just now. I have a receipt I can upload also

Just to clarify you can't purchase online to click and collect. This is an in-store deal only. You can check if your store has it using the click and collect function
Edited by: "jellypawn" 3rd Jan
3rd Jan
I ordered this the other day from here and it has still not arrived. Maybe tomorrow.
3rd Jan

Cheers fam! Picking it up tomorrow.
4th Jan
Great game, but once you’ve reached WT5, it all becomes too repetitive.
4th Jan

Great game, but once you’ve reached WT5, it all becomes too repetitive.

It I have the time to get that far in this game then I'll consider my purchase a win!
4th Jan

True, but when you get to that level you want more, which doesn’t happen
5th Jan
Been this price since before christmas.

PSN have Gold edition for £15.99 which seems to be better deal.
6th Jan

can you link me to the deal showing the same? I did a search before i posted. maybe you could have had over 500 heat had you posted it before christmas
6th Jan

I never said the deal was posted but game was that price before Christmas as I bought one.