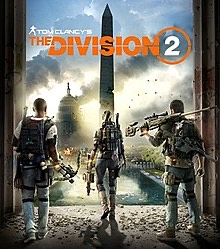 The Division 2: Washington D.C Edition features additional content worth £20. See below for details.

Seven months have passed since a deadly virus hit New York City and the rest of the world, crippling the population. When the virus hit, The Division, a unit of civilian sleeper agents, were activated as the last line of defence. Since then, Division agents have been fighting relentlessly to save what remains.

For The Division, the stakes are higher than ever. Washington, D.C. – the most heavily protected city on earth – is at risk, leaving the entire nation on the brink of collapse. If Washington, D.C., is lost, then the nation falls. As a Division agent who has been in the field for seven months, you and your team are the last hope to stop the fall of society after the pandemic collapse.

Developed by Ubisoft Massive and the same teams that brought you Tom Clancy’s The Division®, Tom Clancy’s The Division® 2 is an online open world, action shooter RPG experience set in a collapsing and fractured Washington, D.C. This rich new setting combines a wide variety of beautiful, iconic, and realistic environments where the player will experience the series’ trademark for authenticity in world building, rich RPG systems, and fast-paced action like never before.

Play alone or with up to 3 friends in a 40-hour campaign in a torn and boiling Washington D.C. and prolong your The Division® 2 journey with fresh, unique, and diverse challenges.
Explore a large and dynamic living world, which evolves depending on your actions and help liberating the city with tactical interventions.
Discover a revamped PvP gameplay in a brand new Dark Zone designed to provide a fair and exciting experience to all players, regardless of their level of progression.
Take part in the never-seen before endgame content and one year of free DLC: new missions, areas and games features.

WASHINGTON, D.C. EDITION CONTENT
Gear up and free the city from its lawbreakers with The Washington, D.C. Edition. This edition includes:

Physical content:
The Tom Clancy’s - The Division® 2 Game in a premium slipcase with an alternative Key Art specially designed for this edition.
A Washington, D.C. Map with a ton of information and secret locations left behind by another Division agent.
A Book of Lithographs with a selection of detachable lithographs, including twenty of the greatest pieces of art from the game.

Digital Content:
The Battleworn Secret Service Pack: don’t get caught, be sneaky and collect information to defeat DC’s enemies with your secret service outfit, an exotic M4A1 weapon skin and a rare emote.

Only at GAME – physical copies of the Division 2: Washington DC Edition are only available from GAME in the UK
PostTweetShare Share with WhatsApp Share with Messenger
Community Updates
GAME DealsGAME discount code
New Comment SubscribeSave for later
12 Comments
6th Mar
Good price for the washington edition if you want the physical extras, but the base game has/is much cheaper digitally.
6th Mar

Agreed. Today I bought the Washington DC edition from GAME. I know it’s little expensive than the digital copy. But this is worth the price because it comes with additional physical content like maps and stuff. Now year 1 pass is free for everyone too
6th Mar

On PS4 at least it doesn't seem cheaper really but if you want the DLC it's probably better to go digital for the deal but it isn't on the store atm
Edited by: "NARMAK" 6th Mar
6th Mar
Still waiting for PC version to drop
6th Mar
OOS
6th Mar

I’m sorry. If you want you can buy the standard version for £7.99(y) . Try to reserve a copy on your local story. May be your are still lucky
Edited by: "anuruddha" 6th Mar
7th Mar
The Division 2’s Year 1 Content Is Free, But the Season Pass Supposedly Lets You Get It Early.

pushsquare.com/new…rly
8th Mar
Tempted by the DC edition, love some special physical content. What's the PS4 playerbase like it's quite an old game right? Are there still lots of people playing?
8th Mar