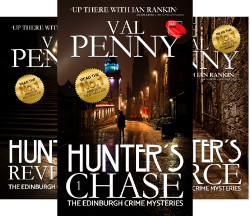 From Book 1: Hunter by name – Hunter by nature: DI Hunter Wilson will not rest until Edinburgh is safe.

Detective Inspector Hunter Wilson knows there is a new supply of cocaine flooding his city, and he needs to find the source, but his attention is transferred to murder when a corpse is discovered in the grounds of a golf course.

Shortly after the post-mortem, Hunter witnesses a second murder, but that is not the end of the slaughter. With a young woman's life also hanging in the balance, the last thing Hunter needs is a new man on his team: Detective Constable Tim Myerscough, the son of his nemesis, the former Chief Constable Sir Peter Myerscough.