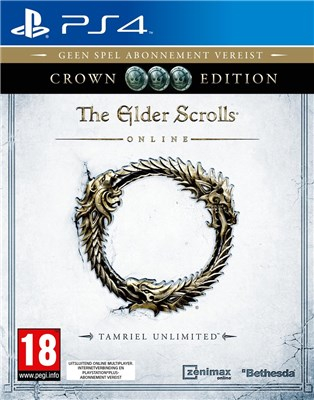 Can't be bad for under £3 delivered.

The Elder Scrolls Online: Tamriel Unlimited Crown Edition includes 1250 Crowns worth 163;8 that39;s 750 more Crowns than the Standard Edition. The Elder Scrolls Online: Tamriel Unlimited is the latest chapter of the awardwinning franchise and will bring the legendary experience online to consoles for the first time. Explore the far reaches of Skyrim the mysterious lands of Morrowind the sprawling metropolis of Daggerfall and beyond. The choices you make from the alliance you join to the battles you fight will shape your destiny and the world of Tamriel. After more than 20 years of bestselling awardwinning fantasy roleplaying games the Elder Scrolls series goes online on console. Experience this multiplayer roleplaying game on your own or together with your friends guild mates and thousands of alliance members. Explore dangerous caves and dungeons in Skyrim or craft quality goods to sell in the city of Daggerfall. Embark upon adventurous quests across Tamriel and engage in massive player versus player battles or spend your days at the nearest fishing hole or reading one of many books of lore. Use any weapon or armor at any time and customize your abilities to play the way you want. The choices are yours and the decisions you make will shape your destiny and the persistent world of The Elder Scrolls Online: Tamriel Unlimited. STORY: The Elder Scrolls Online: Tamriel Unlimited is set roughly 1 000 years before the events in The Elder Scrolls V: Skyrim and the coming of the Dragonborn and just before the rise of Tiber Septim the first Emperor of Tamriel. Three Alliances have emerged across the continent each struggling for supremacy over the land. As these great powers battle one another for control of the Imperial City and with it all of Tamriel darker forces are moving to destroy the world. Play the Way You Like Battle craft fish steal siege or explore. The choice is yours to make in a persistent Elder Scrolls world. Use any weapon or armor at any time and customize your abilities to play the way you want as you uncover the mysteries of Tamriel and adventure on your own terms. A Multiplayer Online RPG The legendary experience comes online allowing you to share your adventures with others. Adventure alone quest with friends or join an army of thousands in epic player versus player battles. No Game Subscription Required With a single purchase enjoy hundreds of hours of gameplay without a monthly game subscription fee. Optional DLC game packs will be available for purchase or choose to enroll in a premium membership service ESO Plus where you'll receive access to all major DLC game packs plus ingame bonuses and a monthly allotment of crowns to spend in the new ingame Crown Store the choice is yours. A Console Game For Console Players The Elder Scrolls Online: Tamriel Unlimited console version features a completely reworked user interface specifically designed for console controller
PostTweetShare Share with WhatsApp Share with Messenger
Community Updates
The Game Collection DealsThe Game Collection promo code
New Comment Subscribe Save for later
7 Comments
20th Jan
Good deal... heat
900 Crowns buys you a horse these days, right?
20th Jan
Does this require ps+?
20th Jan

Does this require ps+?

Yes, since it is an online game
20th Jan

Yes, since it is an online game

There are exceptions (Fortnite / Warframe / Apex Legends), though ESO is not one of them.
20th Jan
This games abit of a mystery to me. Do you follow set quest lines like you do in skyrim? if so why do you need the online part of it? what are the online elements

cheers
20th Jan
I read as "Unlimited crown edition". Now that could have brought me back...
21st Jan

Yeah kind of annoying, especially when the price tag can fool you a bit