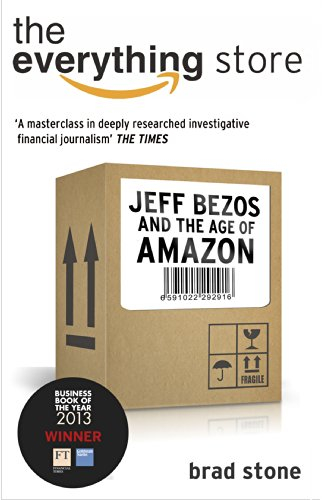 The Everything Store: Jeff Bezos and the Age of Amazon Kindle Edition - £0.99

The definitive story of Amazon.com, one of the most successful companies in the world, and of its driven, brilliant founder, Jeff Bezos.
PostTweetShare Share with WhatsApp Share with Messenger
Community Updates
Amazon DealsAmazon discount code
If you click through or buy, retailers may pay hotukdeals some money, but this never affects which deals get posted. Find more info in our FAQs and About Us page.
New Comment Subscribe Save for later
6 Comments
18th Nov 2019
Wonder if it contains any tips on how I can reduce the amount of Tax I pay?
18th Nov 2019
Wow, people hate Amazon or Jeff or both. I am quite interested in hearing people's thoughts on this.

Definite hate towards him, not paying tax for one, paying min wage and working staff so hard that ambulances end up going to the warehouses. Fact is for anyone to become a billionaire (which in my opinion the world doesn't need) to get that much, you must have stepped on people, treated them like garbage and this guy does just that.
He donates to charities obviously but his the one who ends up creating some of those poor. Min wage full time work isn't enough to put a roof over your head and it should even if its a low skilled job. Not just that the newest warehouses he has being built, he opts for mostly machines, so instead of creating 1000's of jobs, he don't, not like it would make any difference to his money.
To get where he did as well, it started with books, so he would sell books cheaper at a loss, forcing so many bookstores to go out of business all around the world as they can't compete, Then when he corned the market, the prices would go up and that would happen with so many products.
A billionaire doesn't need tax cuts, most don't create new jobs, if you sell in country and have warehouses in one, you should pay the tax. If all these companies did pay like their suppose to, this country wouldn't be in such a mess but instead people are made to hate other groups like the poor, benefits and immigration.
18th Nov 2019
I can understand what you are saying and I wholly agree with it. He intends to do the same thing with logistics now, and will put many delivery firms out of business too.

How many on here avoid buying from Amazon because of the above concerns and instead buy from the local high street? We have all played a part in Bezos becoming what he is.

Our high streets are in a dire situation because people want convenience and cheaper prices.

So how do you fix that?
18th Nov 2019
indeed.co.uk/cmp…ews
Some interesting comments from those who have worked for Amazon.
18th Nov 2019

The way they treat their warehouse stuff and deliver drivers is horrible. All tasks are timed with no margin for error which leads to extremely high level of stress for such low paid jobs.