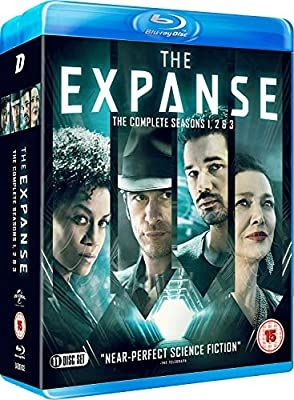 Product Description
A Collection of Seasons One, Two & Three of the smash hit sci-fi series; The Expanse.

Season 1
The Expanse is a thriller set two hundred years in the future, after mankind has colonised the solar system. A hardened detective (Thomas Jane) and a rogue ship's captain (Steven Strait) come together for what starts as the case of a missing young woman and evolves into a race across the solar system to expose the greatest conspiracy in human history.

Season 2
Hundreds of years in the future, humans have colonised the Solar System. The U.N. controls Earth. Mars is an independent military power. The planets reply on the resources of the Asteroid Belt, where air and water are more previous than gold. For decades, tensions have been rising between these three places. Earth, Mars and the Belt are now on the brink of war. And all it will take is a single spark.
Enjoy all 13 episodes of THE EXPANSE: Season Two back-to-back and uninterrupted.

Season 3
As the war between Earth and Mars ignites across the solar system, the terrifying next phase in the evolution of the protomolecule threatens the very existence of humanity. Caught in the middle, the Rocinante crew struggles to deal with tensions amongst themselves, while striving to survive and aid those in peril.

I've just rewatched series 1 and 2, because my poor old brain couldn't remember how series 3 finished. Turned out, I only watched the first 2 episodes and forgot to go back.

Enjoying series 3 now I've remembered to watch it. It's probably a series that benefits from being owned, as there's a lot going on and a few times I've had to go back an episode, but maybe that's just my poor brain.
9th Jan
Fourth series was a bit of a let down in comparison, not so fast paced, less twists, but at least it's been saved to continue for another series.
9th Jan

I feel like it's probably a setup series for what's to come. I believe they are following the books reasonably close too, but cannot say for sure as I haven't read them. Last book (no. 9) is out this year.
9th Jan
Great series (available on prime if you have it). Each one's a bit different and season 4 is the biggest change, but I enjoyed it just as much as the preceding 3.
9th Jan

I am a huge fan of the series, and they are indeed following a book per season and there are 8 books out so far and one final book to be released around late 2020/early 2021. trust me when i say this the next two seasons are gonna be freaking amazing. Have a go at the book if you have spare time.
9th Jan

I can assure you this is setting up some pretty huge stuff for next season.

The whole Ilus 'break'(basically all of Season 4) was the weakest individual chapter of the whole series in my opinion, so it should be pretty great from here on out.
Edited by: "Seanspeed" 9th Jan
9th Jan
Heat and bought. I already had series 1 but the boxset for this price is a no-brainer.
9th Jan
Brilliant series, love the special effects.
Sweet have some heat