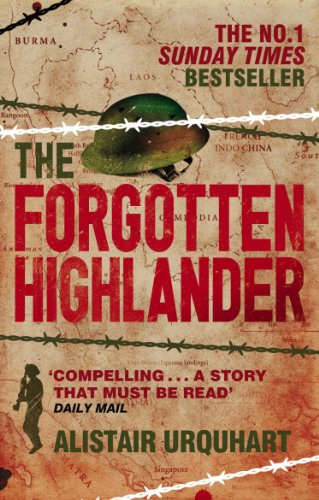 The Forgotten Highlander: My Incredible Story of Survival During the War in the Far East by Alistair Urquhart - Kindle Edition 99p @ Amazon

Makes for a gripping read of one man's extraordinary journey of courage and sheer will to survive and live to tell his story.

Description
Alistair Urquhart was a soldier in the Gordon Highlanders captured by the Japanese in Singapore. He not only survived working on the notorious Bridge on the River Kwai , but he was subsequently taken on one of the Japanese 'hellships' which was torpedoed. Nearly everyone else on board died and Urquhart spent 5 days alone on a raft in the South China Sea before being rescued by a whaling ship. He was taken to Japan and then forced to work in a mine near Nagasaki. Two months later a nuclear bomb dropped just ten miles away . . .

This is the extraordinary story of a young man, conscripted at nineteen and whose father was a Somme Veteran, who survived not just one, but three very close separate encounters with death - encounters which killed nearly all his comrades.

Completely agree - this story will stay with you for years.
10th Apr
An amazing man with an amazing story of courage and luck to survive that ordeal only for our own government shamefuly tried to brush it under the carpet and no hero's welcome.......shamefull
11th Apr
£5.99 now.