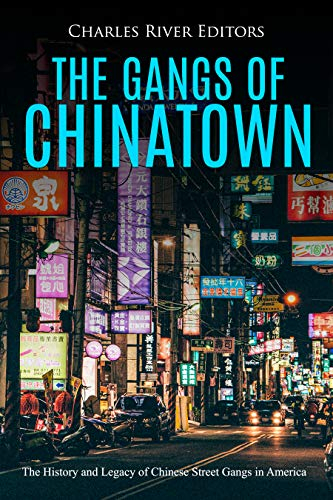 The Gangs of Chinatown: The History and Legacy of Chinese Street Gangs in America - Free Kindle Book @ Amazon

San Francisco Chinatown, September 4, 1977, 2:00 a.m. Despite it being the middle of the night, Chinatown was still a hive of activity. Fresh produce glistening with dew was being delivered by vegetable vendors at grocery stores. Chinese barbeque chefs at neighborhood restaurants were preparing juicy roast duck and sticky sweet red barbeque pork for both the late-night crowd and tomorrow’s lunch rush. Walking down the dense streets, vibrant Cantonese could be heard from Chinatown residents, some jockeying for a seat at late-night dim sum restaurants, a favorite Cantonese staple of little steamed and fried dumplings and pastries.

The restaurant Golden Dragon was no different, except on this night, instead of a peaceful late-night meal, a barrage of bullets would spray into the restaurant, unleashed by gunmen from the notorious Chinese Joe Boys street gang. The gangsters were aiming for their archrivals, the Wah Ching and the Hop Sing Boys. The attack was a revenge strike, as a Joe Boys street soldier had been killed in a running gun battle after a Wah Ching gang ambush on the Fourth of July at the Ping Yuen housing project in Chinatown. The Joe Boys were furious for revenge, and two months later, the death of their fellow gangster still fresh in their minds, the Joe Boys struck. An opportunity presented itself when a lookout spotted Wah Ching and Hop Sing gangsters at the Golden Dragon Restaurant.

Ultimately, the gang shooting failed to kill a single street gang member. Instead, five innocent people were killed along with another 11 wounded. Chinatown and the city were shocked. Chinese gangs, once only a subject spoken in hushed tones among the residents of Chinatown, was now front-page news in America. Although the shooting was a shock to mainstream America, the attack represented a culmination of years of gang violence in the Chinese community. For years, gangs had killed dozens of people in Chinatown, an area that was both a tourist attraction and home to thousands of poor, mostly Chinese-born, immigrants. Most casualties in the gang wars of Chinatown had been criminals, combatants in vicious street combat. But the Golden Dragon shooting was different. This time the battle occurred in a popular restaurant, with victims being innocent civilians with no connection or knowledge to gangs or the revenge origins of the shooting. Chinatown would be changed forever after the Golden Dragon Massacre.

Chinese gangs have been a part of the fabric of American Chinatowns since the first Chinese immigrants arrived in the nineteenth century to work on the railroads. Faced with intense racism and systematic oppression from mainstream society, secret societies called tongs were organized in the urban Chinatowns. These societies provided much needed social and financial support for the Chinese migrants who were treated as pariahs by American society. Eventually, as Chinese immigration increased after the passage of the 1965 Immigration Act, Chinese gangs evolved too. Chinese street gangs, ranging from the Ghost Shadows of urban New York Chinatown to the middle-class Taiwanese Americans that filled the gangs of Southern California, underground Chinese crime groups have continued to evolve and change in America.

The Gangs of Chinatown: The History and Legacy of Chinese Street Gangs in America looks at how some of the gangs formed, what their activities were like, and their impact. Along with pictures depicting important people, places, and events, you will learn about the gangs of Chinatown like never before.
PostTweetShare Share with WhatsApp Share with Messenger
Community Updates
Amazon DealsAmazon discount code
New Comment SubscribeSave for later
5 Comments
Post a comment