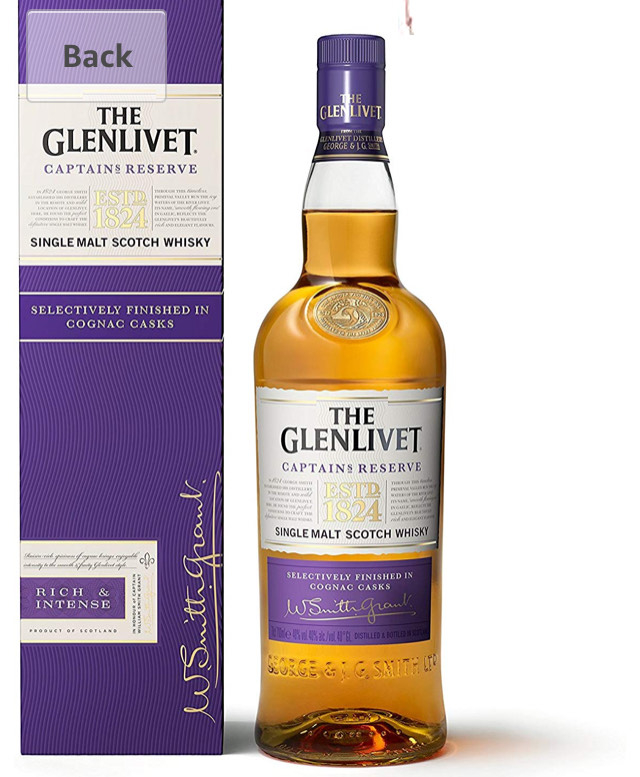 The Glenlivet Captain’s Reserve Single Malt Scotch Whisky is selectively finished in high-quality Cognac casks. This premium single malt scotch whisky has a rich and intense flavour coming from the raisin-sweet taste of Cognac that complements the signature creamy smoothness of The Glenlivet. After maturing this speyside single malt scotch whisky in bourbon and sherry casks, The Glenlivet whisky is finished in ex-cognac casks for at least 6 months, creating a unique rich intense flavour. The Glenlivet Captain’s Reserve Single Malt Scotch Whisky is inspired by the unique character of its namesake, Captain Bill, that will take you on a journey from the misty glens of Scottish Speyside to the rolling vineyards of French Cognac with every sip. Glenlivet is located in Speyside, which translated from Gaelic, means the “valley of the smooth-flowing one”. The Glenlivet’s founder, George Smith was a businessman and entrepreneur who didn’t follow the lead of the majority of still owners who operated in illegal trading. In 1824, he obtained a distiller’s licence so he could produce whisky and trade. In 1876, George filed a request to trademark the name Glenlivet. After years of legal wrangling, George won the exclusive right to call his whisky “THE Glenlivet”, definitively marking it as the single malt scotch whisky that started it all.
PostTweetShare Share with WhatsApp Share with Messenger
Community Updates
Amazon DealsAmazon discount code
If you click through or buy, retailers may pay hotukdeals some money, but this never affects which deals get posted. Find more info in our FAQs and About Us page.
New Comment Subscribe Save for later
5 Comments
6th Dec 2019
Wow, this is a great price! I paid £33 for a bottle of this in Sainsbury's a couple of days ago - it was that price as the label said reduced to clear, and I thought I was getting a bargain.Now this is even cheaper than that!

It is a very nice drink as well.

I don't understand at all why this is cold. The only thing I can think of is people are assuming this is the founders reserve and are getting mixed up. This should have loads of heat by now.