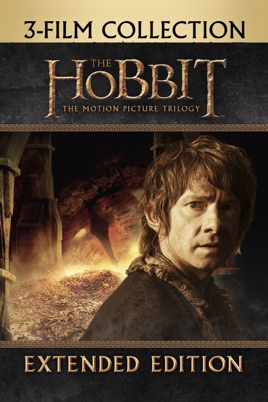 All the movies include the iTunes Extra's.

The Hobbit: An Unexpected Journey
This Extended adventure follows Bilbo Baggins, who is swept into an epic quest to reclaim Erebor with the help of Gandalf the Grey and 13 Dwarves led by the legendary warrior, Thorin Oakenshield. Their journey will take them through treacherous lands swarming with Goblins, Orcs and deadly Wargs, as well as a mysterious and sinister figure known only as the Necromancer. Although their goal lies to the East and the wastelands of the Lonely Mountain, first they must escape the Goblin tunnels, where Bilbo meets the creature that will change his life forever...Gollum. Here, alone with Gollum, on the shores of an underground lake, the unassuming Bilbo Baggins not only discovers depths of ingenuity and courage, he also gains possession of Gollum's "precious" ring that holds unexpected and useful qualities...A simple, gold ring that is tied to the fate of all Middle-earth in ways Bilbo cannot begin to know.

The Hobbit: The Desolation of Smaug
Academy Award® winner Peter Jackson continues his Middle-Earth saga that follows the adventures of Bilbo Baggins (Martin Freeman) who's swept into an epic quest to reclaim the lost Dwarf Kingdom of Erebor from the fearsome dragon Smaug. In the company of thirteen dwarves and the wizard Gandalf the Grey (Ian McKellen), Bilbo enters the Lonely Mountain in possession of Gollum's "precious" ring and his keen blade, Sting. With an all-star cast, including many acclaimed actors from The Lord of the Rings (such as Cate Blanchett, Ian Holm, Christopher Lee, Hugo Weaving, Elijah Wood, Andy Serkis and more), and the effects wizardry of Jackson's award-winning Weta Workshop, Tolkien's epic story comes to life as never before imagined. The Extended Edition film is 25 minutes longer with new and extended scenes, not seen in the theatrical release.

The Hobbit: The Battle of the Five Armies
Academy Award®-winning filmmaker Peter Jackson returns to Middle-earth with the final of three films based on J.R.R. Tolkien's enduring masterpiece. Set in Middle-earth 60 years before the epic Lord of the Rings trilogy, the adventure follows the journey of Bilbo Baggins, who is swept into an epic quest to reclaim the lost Dwarf Kingdom from the fearsome dragon Smaug. Approached out of the blue by the wizard Gandalf, Bilbo finds himself joining a company of dwarves on a journey into wild, treacherous lands swarming with beasts of every ilk. After reaching Erebor and encountering the dragon Smaug, Five Armies assemble for an epic battle that could decide the future of all in Middle-earth. The Extended Edition film is 19 minutes longer with new and extended scenes, not seen in the theatrical release.
PostTweetShare Share with WhatsApp Share with Messenger
Community Updates
ITunes Store DealsITunes Store voucher
If you click through or buy, retailers may pay hotukdeals some money, but this never affects which deals get posted. Find more info in our FAQs and About Us page.
New Comment Subscribe Save for later
32 Comments
25th Nov 2019
Was taking my time posting this as I didn’t think anybody would be up looking lol. Shouldn’t have made my comment in this post first

Oh I’m not saying you saw my comment. I meant I was dawdling finding that post to make a comment ‌
25th Nov 2019
Loved LOTR'S but wasn't too keen on these 3 movies, decent price though.
25th Nov 2019

Lol, I almost did myself. I had a feeling someone else might have seen it.
25th Nov 2019

Lol, I almost did myself. I had a feeling someone else might have seen it.

Yeah I’m watching a movie and checking to see if the movies have updated if they had I would do the list. Only Oceans 8 in 4K up to now though for £4.99. Probably will be 4 or 5 now with the rest.
25th Nov 2019
Shouldn't these be condensed, not extended? I mean that seriously, from a movie maker's perspective.
25th Nov 2019

As movie maker myself, I always look for extensions. But that's home made Pron lol.
25th Nov 2019

I would have hopped for some better deals, with it being Cyber Monday. Though with the west cost being many hours behind, it might be lunch time, before we see more deals.
25th Nov 2019
Can you get iTunes on a 4k telly to watch on 4k?
25th Nov 2019

Can you get iTunes on a 4k telly to watch on 4k?

This and Lord of The Rings Trilogy are only available in HD(Blu-ray). At the moment, with a 4K version rumoured to be coming out next year.

You can watch it on a 4K TV but it will still be HD(1080p). Maybe upscaled if your TV does this Via streaming.

Likewise, it's because of the cash in where they've extended it to a crap week rather than a manic day. Yet to find anything particularly amazing this year.
25th Nov 2019

I hope it is lunchtime as it’s not even worth a list right now. Could be saving it for Black Friday/Cyber Monday though.
Edited by: "ThePointyEnd" 25th Nov 2019
25th Nov 2019
Lots of cold votes on this? Where are people finding it cheaper?
25th Nov 2019

Lots of cold votes on this? Where are people finding it cheaper?

I doubt they are but they are a bit marmite these movies so I am guessing they are voting on that rather than the deal. Even the best movies also get downvotes because people see iTunes and vote cold.
Edited by: "ThePointyEnd" 25th Nov 2019
25th Nov 2019

I think its a bit Marmite too, but I'd try and find it cheaper elsewhere. If I can't find it cheaper I'd normally not vote, just because I don't like the object/movie on sale.
25th Nov 2019

I dont even vote any deal cold. Just vote hot on good deals but I have seen great movies in 4K for £2.99 being voted cold. The mind boggles sometimes how some people think.
Edited by: "ThePointyEnd" 25th Nov 2019
25th Nov 2019
The films are also on prime movies now
25th Nov 2019

The films are also on prime movies now

How much on there.?

I'll wait for the price to come down on Lord of the Rings Trillogy before I buy.
25th Nov 2019

Fellowship and two towers extended have both been £4 this year at separate times, just the the third.
25th Nov 2019

I've missed those deals, I've not watched any of the extended versions yet.
25th Nov 2019

I've missed those deals, I've not watched any of the extended versions yet.

I think so, although some of the added scenes are actually better than a fair chunk of the original ones.

This set runs to 8 1/2 hours in total, cut that down by half (you could easily lose 70% of the dwarf scenes for a start) and you'd have a much better film. The only major elements I'd retain in full are all of Smaug's scenes.
25th Nov 2019

Agreed, something is actually happening in those sequences...

Ironically, the studio didn't heed the LOTR trilogy's own warning about the power of the ring (dollar in our world). They sought to do good, returning us all to Middle Earth - we all yearned for it - but the power of the $ utterly ironically gave the Hobbit...

If they'd watched the first 30 minutes of their own movie before they started on the Hobbit, perhaps we would have had ONE great epic...
25th Nov 2019
Good deal but not sure if I could cope with the extended versions ... long enough already!! Voted hot anyways 🏼
25th Nov 2019

Hoping the third will be soon, keeping my eyes peeled on here for news! Maybe waiting for a Christmas deal? I grabbed this as even though it's not an ideal translation of the books it's still good entertainment and it has Sylvester McCoy! Plus the extended versions have a whole bunch of extras, too.