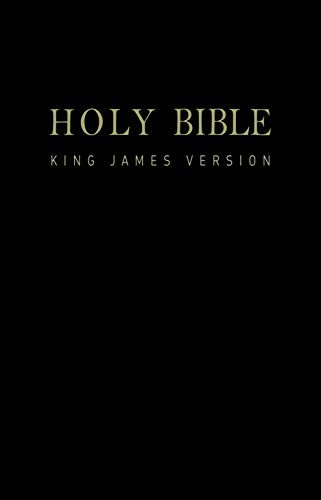 The Authorized King James Version of the Holy Bible is God’s providentially appointed Word for the whole world which reveals the name of the Father as “Jehovah”, and the name of His Son, “Jesus”, in whom there is salvation, and the name of the “Holy Ghost”, who also manifests Himself in true traditional Pentecostalism.
The standard text of the Pure Cambridge Edition of the King James Bible has been published on this website. You are free to download this definitive electronic text of the King James Bible (KJB). The actual King James Bible text of the Pure Cambridge Edition (PCE) has been presented free of any typographical error, and is completely correct. It is scrupulously exact in typesetting right down to the italics and punctuation.
This precise edition of the King James Bible is wholly based on the received traditional text as was published by Cambridge University Press and by Collins publishers. This electronic text has been made in Australia for the purpose of the exaltation of the Bible within Australasia. This Word is necessary for true Pentecostal revival throughout the whole Earth.


The English Bible has been providentially raised up by God for a great dissemination of the true Gospel. The Pure Cambridge Edition (first published circa 1900) is the product of the process of textual purification that has occurred since 1611 when the Authorized Version was completed, and has been used (often unwittingly) as the received text for many decades. Millions of copies conformed to this edition were issued by Bible and missionary societies in the twentieth century. This text stands in contrast to all other editions (especially newly edited and modernised ones). The providentially established and correct text has, among other things, “Geba” not “Gaba” at Ezra 2:26.
The following downloadable files of the Holy Bible are presented for any use, including all forms of further publishing. Use this text as the definitive standard.
PostTweetShare Share with WhatsApp Share with Messenger
Community Updates
Amazon DealsAmazon discount code
New Comment SubscribeSave for later
Top comments
23rd Sep
I must be a true deal hunter, i am an atheist but didn't hesitate.
23rd Sep
Alright, time to own up. Who prayed for plagues?
23rd Sep
how does this one end
23rd Sep
Everyone needs a bit of spirituality in their lives whether it’s through your local football team or religion. My thoughts on this are very much what the bigger picture is - and no one alive ultimately knows for sure what is outside of the visible universe. Just spreading the love on a Wednesday - won’t be long until Friday
37 Comments
23rd Sep
I saw King James and thought LeBron....
23rd Sep 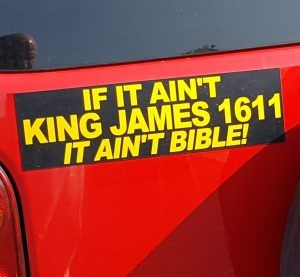 Amen America. Amen.
23rd Sep
I must be a true deal hunter, i am an atheist but didn't hesitate.
23rd Sep
how does this one end
23rd Sep
Alright, time to own up. Who prayed for plagues?
23rd Sep
Oolon Colluphid is the author of the "trilogy of philosophical blockbusters" entitled Where God Went Wrong, Some More of God's Greatest Mistakes and Who is this God Person Anyway?. He later used the Babel Fish argument as the basis for a fourth book, entitled Well, That About Wraps It Up For God.
23rd Sep

I must be a true deal hunter, i am an atheist but didn't hesitate.

Me too. I was going to add that it's a decent work of fiction - but actually, it isn't.
23rd Sep

Well this is the original and the sequel. The third volume, The Book of Mormon, doesn't seem as popular.
23rd Sep

Amen
23rd Sep
Everyone needs a bit of spirituality in their lives whether it’s through your local football team or religion. My thoughts on this are very much what the bigger picture is - and no one alive ultimately knows for sure what is outside of the visible universe. Just spreading the love on a Wednesday - won’t be long until Friday
23rd Sep

This is the Hollywood ending edition, which somewhat spoiled it for me. I'm eagerly awaiting the original dead sea scrolls edition, but it seems to be taking forever to remaster.
23rd Sep

im surprised your name hasnt been

There are many people here who are unable to see the Bible as a cultural book
Edited by: "Ignoramus" 23rd Sep
23rd Sep

You should have known this deal would be a Cross to Bear.
23rd Sep

Yes, it's the accurate version... while it suits.
23rd Sep

It is even signed by the man himself. King James, I mean!
23rd Sep

You should have known this deal would be a Cross to Bear.

You should have known this deal would be a Cross to Bear.

Ahhhh... The Allman Brothers by any chance? Btw if not, have a listen
23rd Sep
The Word of God is a masterpiece! Shows the plans of God from the beginning to have a relationship with humanity, culminating in the coming of Jesus which changed forever our world.


I don't see how this can be s bargain though. The Bible is provided free of charge in several apps. The YouVersion Bible app has the King James and dozens of other versions, there's also the Bible Hub where you can check the original texts when the translation is s bit vague.
24th Sep
Thanks for this
24th Sep
Great book! Thank you x
24th Sep
Bible.com has various versions available to read via web browser or mobile app for free. KJV is a bit too old English for me. I tend to read New International Version, although this text is starting to show it's age too.
24th Sep

I will default to the NIV for my study, but have found myself cross referencing with the NLT too lately.
24th Sep
Don’t know why anyone would be paying £1.99 ever when this bible and as many other bibles have always been free on the JW app!
24th Sep

The JW Library app is free on Android and iOS and has the King James Version, the Kingdom Interlinear, Byington, the American Standard Version and the New World Translation all FREE in English. Paying for a Bible should be a thing of the past.
24th Sep
King James is grammatically inaccurate in its grammar and translation , it was of its time and helped many people have a personal copy but today after through research on Language and Grammatical thought translation a student of the bible would require a better edition.
24th Sep

The KJV remains an excellent work (as most do), but yes, we cannot ignore the archeological finds etc over the past 400+ years that have further enriched our knowledge and understanding of all things biblical.

Nevertheless, it would equally be folly to ignore the fact that almost all those finds (including the Dead Sea Scrolls) largely support the KJV rather than lessen it in any way (there are 'differences', but those differences are so tiny they do not impact on the message at all).

Ultimately, if anyone enjoys reading the Bible in Jacobean English they can do so in the knowledge that the KJV remains valid, and is still regarded as one of old Englands' major literary accomplishments.
24th Sep

There are big differences which change the context and integrity of the translation, as I said it was a great work of its day but would you put fake brake shoes on your car if you life was dependent on it, No, so why use an inaccurate translation of the Bible if your life depends on it. As a read its ok but not for a serious Christian to base his hope on.
24th Sep

No it's not. There are many differences from the original version. The fact it is the King James version should tell you it is the VERSION which has been changed to his liking to gain his approval. It may be a more palatable version, but it certainly isn't 'the accurate version'.
24th Sep

We have multitudes of parchments and bits of parchments but it's highly unlikely any are of the 'original', it's almost certain every bit of parchment and every scroll from ancient times are all copies of copies.

As for King James changing it; any comparison with the ancient works completely dismisses any notion of interference.

These things are not difficult to find on the internet.
24th Sep

The internet is full of differing counsel depending on your message. Rather a trip to the British Museum in London or the John Rylands Library in Manchester will enlighten you as to the mistakes in the King James Version. The only people defending this version's use in the modern day would be those accepting of its errors and not wanting the True and Unadulterated Word of God.
Integrity of scripture is Crucial only then can Gods Word be understood and explained free from errors. People have enough problem placing faith in the Bible at times without misleading errors.
24th Sep

The internet is indeed full of differing counsel, but it would be commonsense to stick with the offerings of recognised biblical scholars rather than Joe anybody.

My comment to the other poster in regards to the 'original version' and the fact that all parchments, bits of parchments, scrolls etc are almost certainly not the 'original' (even those in our museums) still stands.

As I wrote elsewhere, we are well blessed to have found a great many things which have improved our understanding - and shown differences, in almost every version - but have not impacted on the message.
27th Sep
Genuine question. So has the King James version been translated into German... French... Spanish... Chinese etc etc. If so is it still the King James version if it’s in a different language? I’m assuming that all these versions would then be seen as ‘definitive’ by the King James lovers? Or does it absolutely have to be in English?
28th Sep