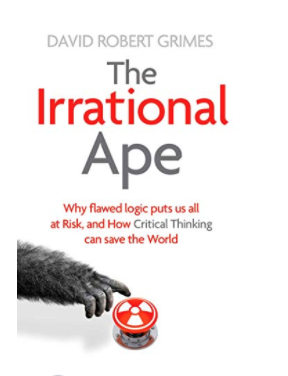 THE IRISH TIMES TOP FIVE BESTSELLER
‘An unstoppable page-turner. If our leaders were forced to read this book, the world would be a safer place’ Richard Dawkins
‘A beautifully reasoned book about our own unreasonableness’ Robin Ince

Why did revolutionary China consider the sparrow an ‘animal of capitalism’ - and what happened when they tried to wipe them out? With a cast of murderous popes, snake-oil salesmen and superstitious pigeons, find out why flawed logic puts us all at risk, and how critical thinking can save the world.

It may seem a big claim, but knowing how to think clearly and critically has literally helped save the world. In September 1983, at the height of the Cold War, the Soviet Union’s early warning system showed five US missiles heading towards the country. Stanislaw Petrov knew his duty: he was to inform Moscow that nuclear war had begun, so that they could launch an immediate and devastating response. Instead, he made a call to say the system was faulty. He’d assessed the situation and reasoned that an error was more likely than such a limited attack.

We may not have to save the planet from nuclear annihilation, of course, but our ability to think critically has never been more important. In a world where fake news, mistrust of experts, prejudice and ignorance all too often hold sway, we can all too easily be misled over issues such as vaccinations, climate change or conspiracy theories. We live in an era where access to all the knowledge in the world is at our fingertips, yet that also means misinformation and falsehoods can spread further and faster than ever before.

In The Irrational Ape, David Robert Grimes shows how we can be lured into making critical mistakes or drawing false conclusions, and how to avoid such errors. Given the power of modern science and the way that movements can unite to protest a cause via social media, we are in dangerous times. But fortunately, we can learn from our mistakes, and by critical thinking and scientific method we can discover how to apply these techniques to everything from deciding what insurance to buy to averting global disaster. This book, packed with fascinating case studies and examples, helps ensure we are ready for the modern world.

‘From anti-vaxxers to Dunning-Kruger, from homeopathy and astrology to “false balance” (what I call the BBC Fallacy), from misused statistics to nuclear brinkmanship, our irrationality could be our undoing. A book exposing the irrational ape and teaching us to mend our ways might so easily have become all preachy and teachy. Instead, such is David Robert Grimes’s storytelling skill, his book is an unstoppable page-turner. If our leaders were forced to read this book, the world would be a safer place.’ — Richard Dawkins

‘A beautifully reasoned book about our own unreasonableness’ — Robin Ince

‘Grimes’s book addresses an all-too-urgent contemporary political question: how do we protect our societies and ourselves from charlatans and fools?...It brings a fresh perspective, and has been painstakingly researched. This spirited cocktail of data leavened with anecdotes is served up in Grimes’s trademark provocative, combative style...a highly creditable debut from a skilled communicator.’ — John Gibbons, Irish Times

Dr David Robert Grimes is a physicist, cancer researcher and and science journalist. Born in Dublin in 1985, he is affiliated with Oxford University and Queen’s University, Belfast. He contributes to both the BBC and RTE discussing science, politics and media and has written for the Guardian, Irish Times and the Spectator, among others.
PostTweetShare Share with WhatsApp Share with Messenger
Community Updates
Amazon DealsAmazon discount code
New Comment SubscribeSave for later
1 Comment
6th Sep