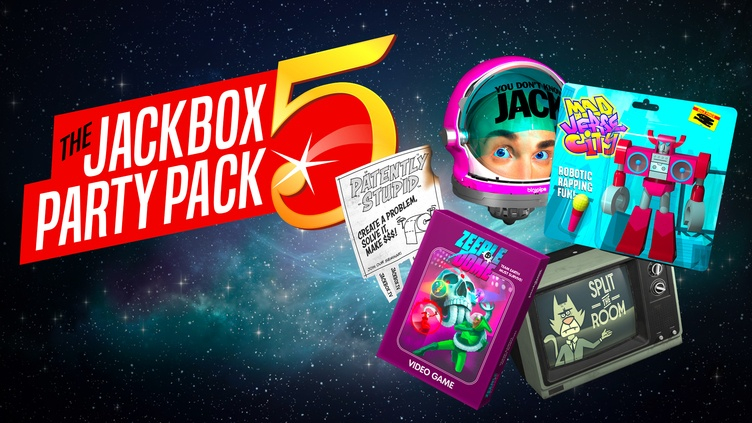 Cheapest I have seen the latest party pack drop, was personally waiting for it to drop under £15 so snapped it up today.


About this game
Get ready for the biggest Party Pack yet with The Jackbox Party Pack 5. With this Steam key, players will get to enjoy five party-saving new games from the ever-popular Jackbox Games developer.

Players are tasked with answering multiple-choice questions and score points via in-game money earned for answering questions correctly and in a shorter amount of time.

SPLIT THE ROOM
A what-if game for 3-8 players. Create strange and divisive hypothetical situations in order to split the room's response. Laugh, argue, and ultimately discover which one of your friends or family members have the strangest logic!

MAD VERSE CITY
It's time to channel your inner MC with this lyric-writing game for 3-8 players. Featuring retro-cartoony art, players take on the role of a rap-battling robot, which also lets you write sick rhymes using your smartphone.

PATENTLY STUPID
Are you a problem-solving whiz? Jump into the act-fast competitive drawing game for 3-8 players, where players must create odd inventions to solve bizarre problems.

Join your seminar hosts Toby and Lena as they guide you through the world of invention and finance, with each seminar attendee (player) creating a bizarre problem that another attendee must solve.

CRAB NEBULA, ZEEPLE DOME
Out of this world fun! Join the deadliest game show for 1-6 players. Players must fling themselves at bloodthirsty aliens to win millions of Zubabucks!

Play using your phones, tablets or computers - no extra controllers are needed!

YOUR OFFICIAL THE JACKBOX PARTY PACK 5 STEAM KEY GIVES YOU:

PLEASE NOTE: The Jackbox Party Pack 5 is in English only. The game is local multiplayer but can be enjoyed over streams with remote players.
PostTweetShare Share with WhatsApp Share with Messenger
Community Updates
Fanatical DealsFanatical Discount Codes
If you click through or buy, retailers may pay hotukdeals some money, but this never affects which deals get posted. Find more info in our FAQs and About Us page.
New Comment Subscribe Save for later
2 Comments
23rd Nov 2018
I think you mean £14.34/£ 40 %

I was going to post this as it's LOWEST EVER at a 40% saving just now, then I found this post.
isthereanydeal.com/gam…ry/

I think you may want to change the 10% saving shown as 'The Jackbox Party Pack 5' is also currently 25% OFF on Steam but costs more £17.84/
store.steampowered.com/app…461