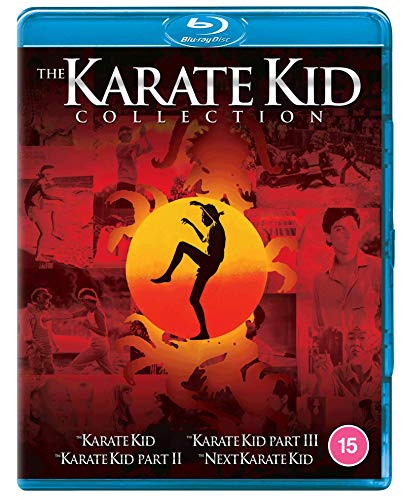 In 'The Karate Kid' (1984), Daniel (Ralph Macchio) arrives at his new school in California and soon finds himself bullied by a bunch of karate-trained creeps.

Help is on hand in the form of the school janitor (Pat Morita), a wise old martial arts instructor who trains Daniel to become a karate expert.

This is lucky, because when the chief bully discovers that Daniel has taken up with his girlfriend, he's not going to be very happy about it.

In 'The Karate Kid 2' (1986), Daniel decides to accompany his teacher Mr Miyagi to his home island of Okinawa.

Mr Miyagi has not seen his home in 40 years, on account of a vicious feud between him and an old friend over the affections of a woman.

Meanwhile, Daniel is in similar trouble after falling for a girl who has captured a bully's fancy.

In 'The Karate Kid 3' (1989), Daniel returns to LA and is emotionally blackmailed into defending a championship title he doesn't want, and becomes upset when his mentor Mr Miyagi refuses to train him for the bout.

Who is behind this troubling turn of events? None other than Danny's old enemy Kreese (Martin Kove).

Finally, in 'The Next Karate Kid' (1994), Julie's (Hilary Swank) parents have recently met a tragic death and as a result she has become rude, violent and very ill-mannered to everybody around her.

This causes her to be constantly harrassed by a violent all-male gang.

So Mr. Miyagi takes her on as a potential karate champion, helping her stand up to her aggressors and to reclaim her inner and outer strength.
PostTweetShare Share with WhatsApp Share with Messenger
Community Updates
Post a comment