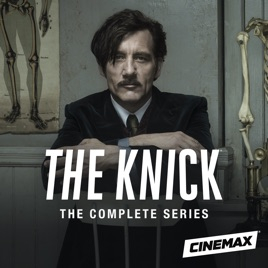 A brilliant surgeon pushes the boundaries of medicine, morality and race relations at a New York City hospital at the turn of the 20th century in this drama series. Throughout 10 episodes--all directed by filmmaker Steven Soderbergh--the show follows Dr. John Thackery (Oscar(R)-nominee Clive Owen) and his groundbreaking work at the Knickerbocker Hospital (a.k.a. "The Knick") which faces a major upheaval due to an exodus of affluent patrons, an infusion of poor patients, and gross mismanagement of its finances. As he searches to solve a plethora of medical mysteries and develops a cocaine habit, Thackery must deal with a variety of co-workers and patients, including driven new arrival, Dr. Algernon Edwards (Andre Holland) and the wealthy and influential Cornelia Robertson (Juliet Rylance). Also with Eric Johnson, Michael Angarano, Eve Hewson, Cara Seymour, Jeremy Bobb and Chris Sullivan.

That aside - this is a fantastic watch.
22nd Apr

Also agree stunning tv series such a shame it got cancelled
22nd Apr
What a steal! $8.99 for all 20 episodes!! Bought.
22nd Apr

Over FIVE times more expensive on iTunes UK!! Ludicrous.
22nd Apr
Excellent Series. Thanks for posting, OP. Heat.
22nd Apr
brill series amazing ending. For a while I was convinced it wasn't actually the ending and the show would return
22nd Apr
Great show. I went to a screening of this before it was released and a bloke in the next row fainted during the first scene! He had to be carried out.
22nd Apr
Loved season 1 but was not gripped by season 2. Only watched first episode of season 2.....Worth sticking with?
23rd Apr
I always liked the dentist....well like is not what I meant....
Shame it never made it to Series 3 enjoyed it.
23rd Apr
Does anyone know how to "get" this...? I mean changing store to US etc. I haven't seen an up to date guide that actually works. Thanks.
23rd Apr
How did I miss that there was a second season of this! Sake!
23rd Apr
sorry but how do you buy from us? if in uk that is.
Edited by: "kidou" 23rd Apr
23rd Apr
Been watching this week and it's s great show.