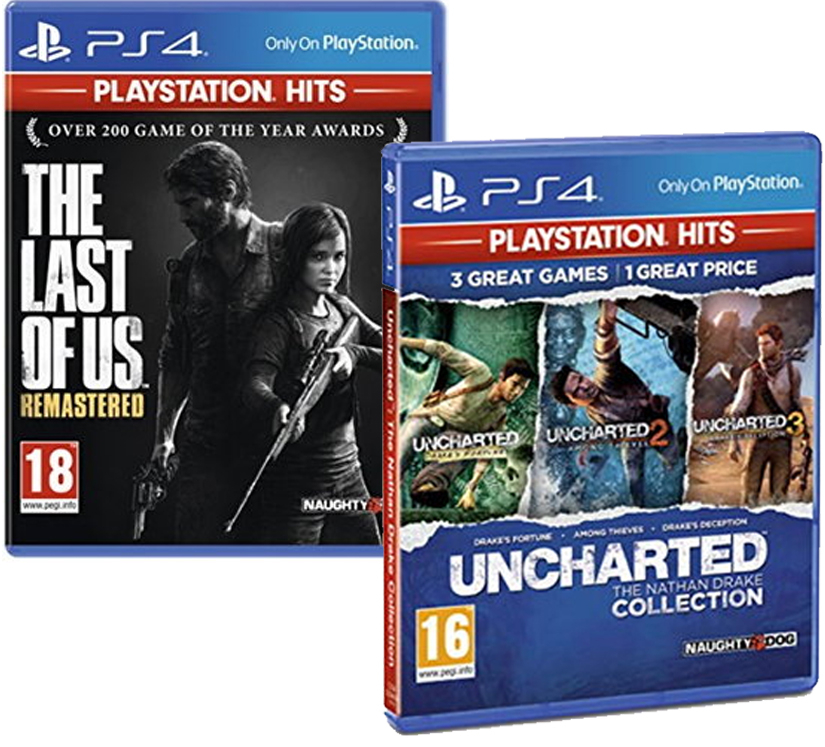 THE BEGINNING OF A LEGEND
Jump into the perilous journey that kick-started the legendary escapades of Nathan Drake. Hunt for the lost treasure of El Dorado, with the help of courageous journalist Elena Fisher and Drake's mentor and friend Victor "Sully" Sullivan.

Enjoy peerless storytelling from the team at Naughty Dog, as you race to discover the fabled city of gold before your ruthless enemies.

Experience the classic PlayStation®3 adventure that redefined the genre, now on PlayStation®4.

A TRUE TREASURE:
- Take control of Nathan Drake on his first breathtaking adventure.
- Uncover clues and unravel mysteries to find a forgotten island and a treasure that was thought to have never existed.
- Experience award-winning storytelling from Naughty Dog, acclaimed developers of The Last of Us.

THE ADVENTURE CONTINUES...
Reacquaint yourself with fortune hunter Nathan Drake through a tale of life-threatening danger, exotic locations and heroic rescue missions.

Delve into the secrets of Marco Polo's doomed voyage and the legendary Himalayan valley of Shambhala. You'll cross paths with some old faces plus brand new adversaries, including a deadly fugitive war criminal.


A TALE OF MANY CITIES:

- Continue the adventures of legendary treasure hunter Nathan Drake in a tale of danger, heroism and treachery.

- Follow a gripping storyline, with engaging cinematics and the Uncharted series' celebrated blend of action, puzzles and humour.

Set out on an adventure with Nathan Drake - the intrepid fortune hunter returns and is on the hunt for the fabled Atlantis of the Sands.


Journey from the mean streets of London to the Arabian Peninsula and overcome extreme peril and dangerous new enemies to survive. Experience the third instalment in the critically acclaimed adventure series that redefined the genre.

- Delve into an action-adventure that blurs the line between games and Hollywood films - combining story with dramatic action sequences and a thrilling pace.

- Take on opponents in more ways than before: hand-to-hand combat with multiple enemies, contextual melee attacks and new stealth options.

The Last Of Us Remastered

Joel and Ellie, brought together by harsh circumstance, must survive a brutal journey across the US in a dangerous post-pandemic world.

Winner of over 200 Game of the Year awards, The Last of Us has been rebuilt for the PlayStation 4 system, now featuring full 1080p, higher resolution character models, and improved shadows and lighting, in addition to several other gameplay improvements.

20 years after a pandemic has radically changed known civilisation, infected humans run wild and survivors are killing each other for food, weapons--whatever they can get their hands on. Joel, a violent survivor, is hired to smuggle a 14 year-old girl, Ellie, out of an oppressive military quarantine zone, but what starts as a small job soon transforms into a brutal journey across the U.S.

- Explore a brutal post-pandemic world, fully realised with the power of the PlayStation 4 system.

- Delve into Ellie's past in Left Behind, the single-player prequel chapter.

TLOU and Until Dawn grabbed, not bad 12 pounds each, heat! Thank you!

Cheers mate
11th Feb 2019
AO.com has a better deal With Game10 code The Last Of Us Remastered & Uncharted Collection for £20
11th Feb 2019
Yakuza 0 for £12, dont worry you wont be completing that game quickly
12th Feb 2019
PlayStation 5 will be out by the time they bloody release TLOU 2 damnit!
12th Feb 2019
A cover is a cover but I just wish they got rid of that crappy Uncharted one. What was wrong with the previous Nathan Drake silhouette
12th Feb 2019

Yakuza 0 for £12, dont worry you wont be completing that game quickly

The base game you will, all the extra nonsense filler and side games are pretty pointless
12th Feb 2019

Is this only through pc? Because i m trying through my phone and it won't accept the promo code. I tried on a pc and it accepted it.
12th Feb 2019

Nothing about it is pointless, its part of the story, thanks for the "pointless" negative feedback
12th Feb 2019

Playing card games, outrun and collecting pervy photos is part of the story? c;mon now, it's filled with sub games that have nothing to do with the anything

I know the whole yakuza series, i started with the first 2 on the ps2.

Isnt many japanese games involving something to do with pervy etc?
12th Feb 2019

Well ok, was just talking about this particular game... and your definition of 'completion' - my point was that if you mean 100% on all the mini games it's rather tedious and imo pointless, i didn't buy a PS4 to play backgammon and roulette for hours , but if you strip all that filler out and don't hunt for trophies and just 'complete' the story then this game isn't that big really.
Edited by: "Jace_Phoenix" 12th Feb 2019
12th Feb 2019
These combined are the best games of the last ten years. I wish I was an Xbox fanboy who just got a PlayStation .
12th Feb 2019
Skipped PS4 so will enjoy these great cheap games when I get a ps5 slim
12th Feb 2019
Wow, so much incredible gaming here for the money. Uncharted 1-3 are all brilliant, and the Last Of Us is one of the best games I've ever played. The conflict I felt over decisions at the end of the game weighed on my mind for weeks.
12th Feb 2019

I played TLOU after Uncharted 4. I thought Uncharted 4 was awesome and I couldn't get in to TLOU, oh just another boring zombie type game, but when that game kicked in and I realised just how awesome the story is and the interaction in the story, there still hasn't been a game like it for me at all. The gameplay is beyond anything I'd played before. My favourite game ever. I fear TLOU2 in case it's like the sequel to 2001: A Space Odyssey which totally ruins the story of the first film and the mystery. Also I don't remember making any decisions that affected the storyline in TLOU at the end.
Edited by: "fishmaster" 12th Feb 2019
12th Feb 2019
U1-U3 remastered at 1080p, running 60 fps with improved shooting in U1-U3 and better Drake model and improved textures. Whata not to like bro.
12th Feb 2019

PlayStation 5 will be out by the time they bloody release TLOU 2 damnit!

Yea, remember how long we had to wait for uncharted 4
13th Feb 2019
I picked up both Uncharted Collection and Uncharted 4 for £13 from the Indonesian PSN store. Honestly, some massive bargins. Ok it takes a little effort to set up but as soon as you do topping up Starling cards with the correct currency and paying online is so simple.
15th Feb 2019
+ £2.58 delivery to Ireland, so about €30 for two games delivered there, not bad, thanks!
15th Feb 2019
Uncharted is awesome!
18th Feb 2019