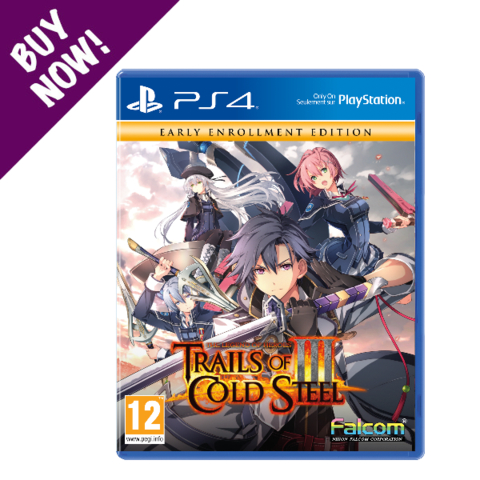 
Originally released on the PS3 in Japan, this renowned title has now been developed natively for the PS4 hardware, a series first.

The Trails series is a popular RPG from the same creators as the Ys series, Falcom. They've gained an extremely enthusiastic fanbase worldwide.

Nearly a year and a half has passed since the Erebonian civil war, and much has changed since then. From the shifting stances of countries to the internal politics of the Empire, and even the life of Rean Schwarzer, the shadows of the past have given way to the embers of a new chapter. Now graduated from Thors Military Academy, Rean has become an instructor at the Thors Branch Campus, a newly-opened academy that quickly finds itself thrust onto the national stage. It is here that he takes the lead of a brand new Class VII, and must guide a new generation of heroes into an unknown future. Though all is calm now, the nefarious Ouroboros organization continues to weave a dark plot that could engulf the entire continent in war...or perhaps something even more sinister. Trails of Cold Steel III invites players into a world full of intrigue and excitement that is years in the making. They will embark on a whirlwind tour through the never-before-seen lands of the recently expanded Erebonian countryside, and encounter fresh faces as well as old friends familiar to fans of the series. In true Trails fashion, the deep, engaging story pairs with an incredible cast of characters and a combat system refined over decades of innovative RPG worldbuilding.

PostTweetShare Share with WhatsApp Share with Messenger
Community Updates
NIS America (NISA Europe) Deals
New Comment SubscribeSave for later
9 Comments
6th Apr
Was hoping they would do a Vita game as I’ve got a code to use for free postage
6th Apr
NISA sent a voucher code (single use) for newsletter subscribers a few weeks ago for £10 off each game in their March sales.

I was able to buy this game and a few others for good prices and paying a single delivery charge. This one was for exactly the same price, but with the voucher you had a bigger selection to choose from. Worth signing up to their newsletter if you like their games.
6th Apr
@mixmixi I want this...

@Biddy2 This is probably like the 6th game in a week that I have wanted.
6th Apr
Thanks been after this for a good price for a while
6th Apr

Vita! There's a blast from the past. I've both 1&2 on my Vita. Still not played.
6th Apr
I'm refusing to play Cold Steel until I can play both Crossbell games in English.
I know there is a top tier fan translation of one of the Crosbell games that just came out, fingers crossed for the other.

Got CS 1-3 sat on a shelf and 4 pre-ordered. That's going to be some backlog to get through.
6th Apr
Utawarerumono Zan is also £20 on there, making it roughly half the price it is every other shop.
6th Apr

Same, both on vita and now on PS4!
Only played persona 4 on my vita so far.. need fo pick it up again lol
8th Apr

Not having a pc I've been silently hoping that a PS4 release of the Trails in the Sky trilogy would happen. I've also bought the Cold Steel games and not started them yet cause I'd like to play the series in order.