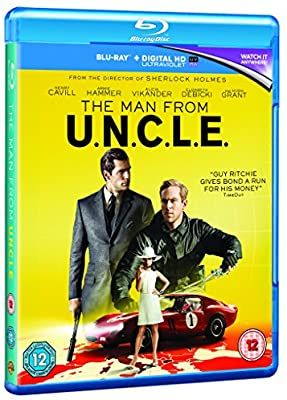 Set against the backdrop of the early 1960s, at the height of the Cold War, The Man from U.N.C.L.E. centers on CIA agent Solo and KGB agent Kuryakin. Forced to put aside longstanding hostilities, the two team up on a joint mission to stop a mysterious international criminal organization, which is bent on destabilizing the fragile balance of power through the proliferation of nuclear weapons and technology. The duo’s only lead is the daughter of a vanished German scientist, who is the key to infiltrating the criminal organization, and they must race against time to find him and prevent a worldwide catastrophe.
PostTweetShare Share with WhatsApp Share with Messenger
Community Updates
Amazon DealsAmazon discount code
New Comment Subscribe Save for later
15 Comments
8th Jan
This....wasn't great. It should have been though. Still better than the Lone Ranger which was as bad, whereas John Carter was panned very unfairly (just matching up the big financial failures)
8th Jan

Agree with you on John carter
8th Jan
In among the worst films i have seen. I thought John Carter was pretty good have watched it a couple of times.
8th Jan
Is this about uncle buck
8th Jan
Well, Henry Caville was playing Superman dressed as Napoleon Solo, Arnie Hammer was playing Arnie Hammer as usual and as bad as ever. Could and should have been a good subject. With NEITHER of these "stars" a different writer a different director and someone else anyone else as Waverley other than Hugh Grant
8th Jan
Loved this film myself and bought it, but each to their own.
8th Jan
I watched 'the Gentleman' and saw the poster of this film in one of the scenes guy does not miss a trick
8th Jan
I actually like John Carter, lone ranger is ok and I quite enjoyed Man from Uncle. I've seen much worse films.
Edited by: "GigahurtzUK" 9th Jan
8th Jan

Couldn't agree more. It bore virtually no resemblance to the 1960's series. I hated this with a passion. Couldn't wait for the film to end.
8th Jan
Good film. Could have been loads better though.
9th Jan
Damn, didn't realise this movie was so hated. I really enjoyed it
9th Jan
I had mine for £2 from Poundland quite a few months back...
I thought it was ok but not as good as the series... Was worth the £2 I paid for it though so cant complain....
10th Jan

I think the Lone Ranger was panned unfairly, I enjoyed it.
10th Jan

I think the Lone Ranger was panned unfairly, I enjoyed it.

Had been looking forward to it. Thought Hammer was awful in the role, Johnnie Depp OKish but why make Tonto a figure of fun ?
But the story - and the writing was atrocious. But each to their own.
10th Jan

I think it's better on second viewing, at the time I saw it first the critics seemed to be judging the film in relation to it's large budget, so many of the reviews were negative.

I thought Hammer and Depp were both good in their roles, especially Depp.