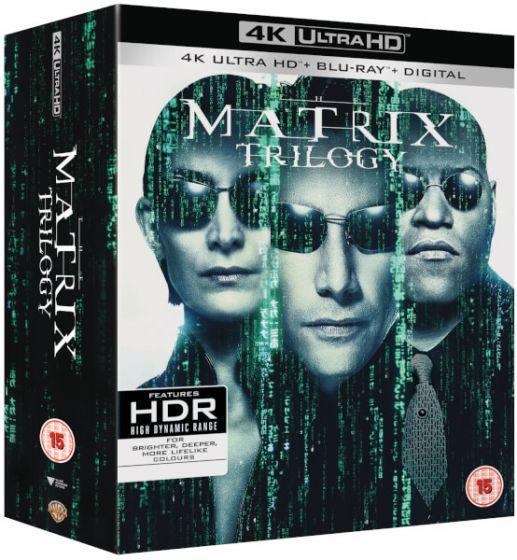 Nice price for this 9-disc 4K box-set which also contains the standard Blu-rays and Digital versions too. Use code BINGE20 at checkout. Free delivery.

THE MATRIX; Perception: Our day-in, day-out world is real. Reality: That world is a hoax, an elaborate deception spun by all-powerful machines of artificial intelligence that control us. Keanu Reeves and Laurence Fishburne lead the fight to free humankind in the see-and-see-again cyberthriller writen and directed by The Wachowskis - and winner of four Academy Awards.

THE MATRIX REVOLUTIONS; The Revolution is now: The Matrix Revolutions. Neo. Trinity. Morpheus. They and other heroes stand on the brink of victory or annihilation in the epic war against the Machines in the stunning final chapter of The Matrix trilogy. For Neo, that means going where no human has dared - into the heart of Machine City and into a cataclysmic showdown with the exponentially more powerful renegade program Smith. For the Wachowskis and producer Joel Silver, that means soaring beyond the amazing visual inventiveness of the first two films.

THE MATRIX RELOADED; Neo. Morpheus. Trinity. They're back for the powerful second chapter of The Matrix trilogy, and exciting new allies join them in the struggle against foes who are cloned, upgraded and closing in on humanity's last enclave. Back, too, are The Wachowskis and producer Joel Silver, expanding their vision with a spectacle that rocks the senses. What is The Matrix? Who created The Matrix? The answers lead to more worlds of bold possibility and to a destiny that passes from revelations to Revolutions.

THE MATRIX: On the 4K disc: Written Introduction by The Wachowskis, Philosophers Commentary by Dr. Cornel West and Ken Wilber, Critics Commentary by Todd McCarthy, John Powers and David Thompson, Cast & Crew Commentary by Carrie-Anne Moss, Zach Staenberg and John Gaeta, Composer Commentary by Don Davis with Music-Only Track. On the Blu-Ray disc: Over 3 hours of exciting bonus content; The Matrix Revisited, Behind the Matrix, Follow the White Rabbit and more...

Realised how wrong I was, the 2nd and 3rd were excellent, even the rave scene wasnt as crap as I remembered. Had forgotten how it ended, and watching it in one sitting made it all make sense.

Matrix and LOTR, best film trilogys ever made
26 Comments
27th Mar
isn't a new one on its way?
27th Mar
So neo is on the way, Sweet have some heat
If I didn't own them on Bluray already I definitely order.
Anyone know when Warners streaming app is being released
Edited by: "Disco.Dave" 27th Mar
27th Mar

isn't a new one on its way?

Not if Corona last longer.
27th Mar
Watched the entire trilogy other day on sky for the first time in 10 years, always loved the first bit always thought 2nd and 3rd were crap.

Realised how wrong I was, the 2nd and 3rd were excellent, even the rave scene wasnt as crap as I remembered. Had forgotten how it ended, and watching it in one sitting made it all make sense.

Matrix and LOTR, best film trilogys ever made
27th Mar
fun fact - after releasing 2 & 3. the production went back to 1 and added a green tint to all the 'fake world' scenes, so there's consistency across the trilogy.
27th Mar
I’m was sure the green tint was there from day one. At least the original dvd release did.

Also I read that the UHD releases actually have removed the tint.
Edited by: "Broadsword" 27th Mar
27th Mar
Got these for a £1 each from Pound land.. No heat from me!!
27th Mar

The Matrix was the best, 2& 3 were average
27th Mar
Those Wachowski Brothers are great
27th Mar
Yes
27th Mar

Those Wachowski Brothers are great

That like saying The Matrix is real
27th Mar

INteresting...First is one of my favourite films of all time....also thought the 2nd and 3rd were total crap...but I half watched the second while it was on TV and thought it wasnt as bad I as thought...maybe I will give the whole trillogy another go
27th Mar

unless you count the Wachowski Brother in the red dress
27th Mar
What trilogy? There was only one film and it was great. The best aspects of this film are the mysterious loose ends and unanswered questions.
27th Mar
Middle Earth 6 films is also on the deal. £29.99 plus 20% off for blu ray. Sadly the extended box set is not on the promotion
27th Mar

isn't a new one on its way?

Was there going to be a suquel ?
27th Mar
Cheers! Had to choose between this and the Dark Knight Trilogy 4k. Already got DKT on Blu-Ray so this wins.

Haven't seen these in years so really looking forward to watching them.
27th Mar

Was there going to be a suquel ?

How does 4K justify 10x price?

I didn't say it did. Just wondered if Poundland sold 4K blurays for a quid
27th Mar
Sorry but even in 4k, £32 is a lot of money for one decent film.
28th Mar