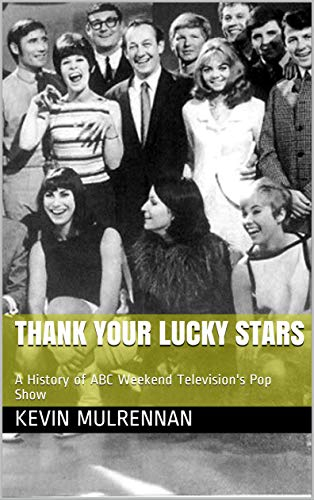 Before Top Of The Pops - A history of the influential 1960's pop show.

This book contains a wealth of facts, information and trivia on ABC's Lucky Stars, a weekly pop show that ran from 1961 to 1966.

The Beatles, the Kinks and the Rolling Stones were among the many hundreds of artists that travelled up the M1 to the ATV studios in Birmingham to appear on the show.

The book has a chapter on fans' memories of the show.

Where possible song titles have been added, as well as recording dates.


Thank Your Lucky Stars was a British television pop music show made by ABC Television, and broadcast on ITV from 1961 to 1966.Of all the show's presenters, Brian Matthew is perhaps the best remembered. Many of the top bands performed on it, and for millions of British teenagers it was essential viewing. As well as featuring British artists, it often included American guest stars.

It would appear from the surviving footage that the bands mimed their latest 45. Occasionally a band was allowed to do two numbers (possibly the A-side and B-side sides of the latest single or an EP or LP track); bands of a higher status such as The Beatles or The Rolling Stones would sometimes play up to as many as four numbers.

Audience participation was a strong feature of Thank Your Lucky Stars, and the Spin-a-Disc section, where a guest DJ and three teenagers reviewed three singles, is a very well remembered feature of the show. Generally American singles were reviewed. It was on this section that Janice Nicholls appeared. She was a former office clerk from the English Midlands who became famous for the catchphrase "Oi'll give it foive" which she said with a strong Black Country accent. After she was dropped from the show she trained as a chiropodist and ran a practice in Hednesford in Staffordshire. Billy Butler was another reviewer.[3]

The Beatles second national television performance was on the programme, the first being on children's programme Tuesday Rendezvous on 4 December 1962. The first theme song was by Peter Knight & The Knightriders and later on "Lunar Walk" by Johnny Hawksworth was used.

The show ended on 25 June 1966, after two thousand artists appearances.

PostTweetShare Share with WhatsApp Share with Messenger
Community Updates
Amazon DealsAmazon discount code
New Comment Subscribe Save for later
4 Comments
18th Jan
Thanks Boz. I remember the Brummie lass, I was a small kid at the time, her accent had our family in stitches.
18th Jan
Oi'll give it foive!
18th Jan
Thanks Boz..
21st Jan
thank you