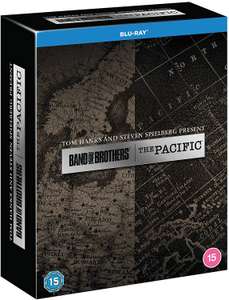 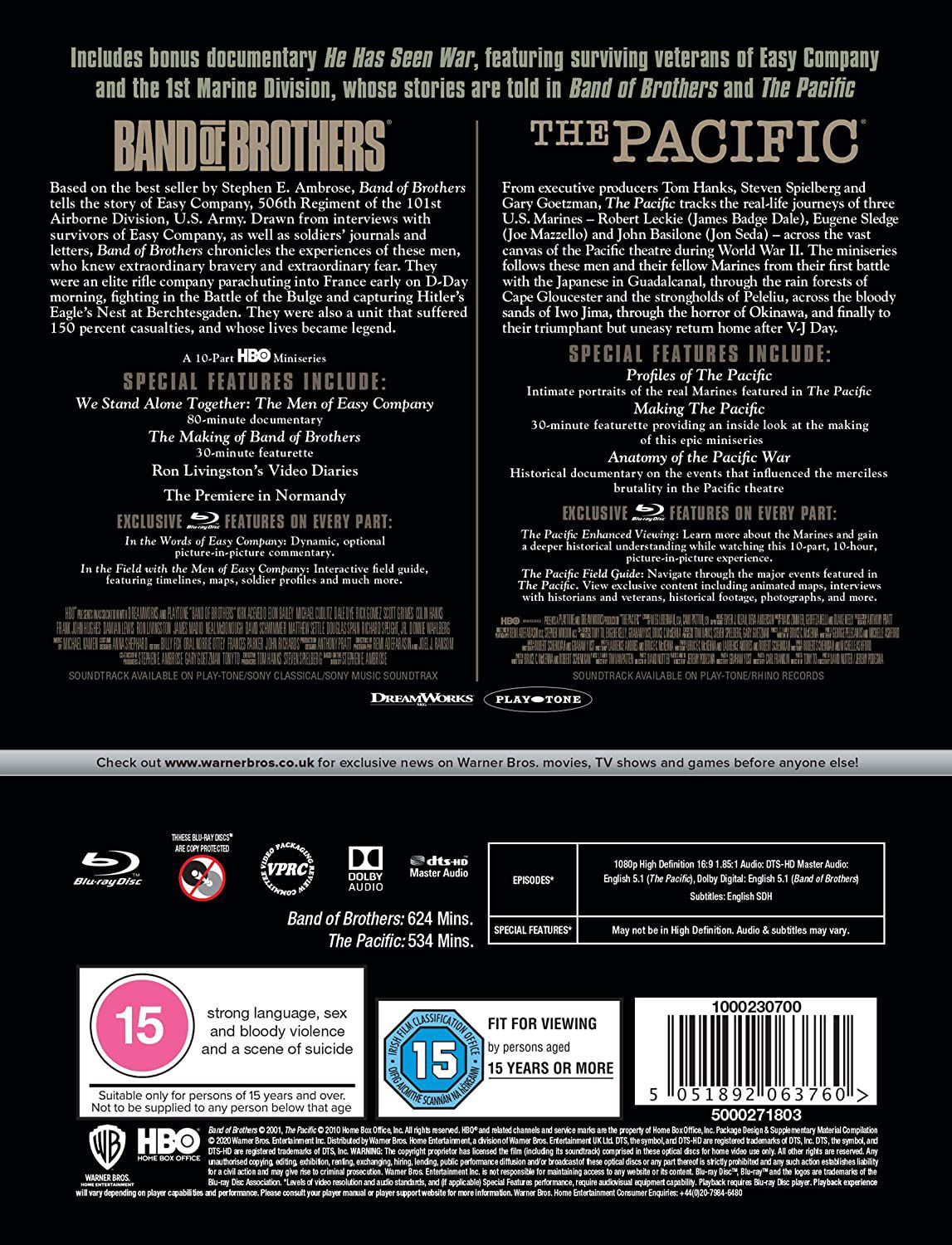 Product Description
This item is an import and contains foreign writing on the rear but the disks and menus are all in English. An amazing gift set that combines two best selling TV box sets. From executive producers Tom Hanks, Steven Spielberg, and Gary Goetzman the two critically acclaimed 10-part HBO Miniseries Band of Brothers and The Pacific come to us in a stunning Blu-ray gift set. Includes a never seen before bonus disc.

Band of Brothers
Based on the bestseller by Stephen E. Ambrose, the epic 10-part miniseries Band of Brothers tells the story of Easy Company, 506th Regiment of the 101st Airborne Division, U.S. Army.

Drawn from interviews with survivors of Easy Company, as well as soldiers' journals and letters, Band of Brothers chronicles the experiences of these men who knew extraordinary bravery and extraordinary fear. They were an elite rifle company parachuting into France early on D-Day morning, fighting in the Battle of the Bulge and capturing Hitler's Eagle's Nest at Berchtesgaden. They were also a unit that suffered 150 percent casualties, and whose lives became legend.

The Pacific
From the team behind the Emmy;- and Golden Globe;-winning HBO miniseries Band of Brothers comes The Pacific: an epic ten-part miniseries that tracks the intertwined odysseys of three U.S. Marines - Robert Leckie, Eugene Sledge and John Basilone - across the vast canvas of the Pacific Theater during World War II. These men, along with other Marines, are tracked from their first battle on Guadalcanal in 1942, through the rain forests of Cape Gloucester and strongholds of Peleliu, across the bloody sands of Iwo Jima and Okinawa and, finally, to their triumphant but uneasy return home after V-J Day in 1945.

Contains all extra content from previous editions of Band of Brothers and The Pacific plus 60 minutes of never before seen footage:

Called to Service
The 60-minute documentary, Called to Service, will include new historian interviews and reunites veterans from Easy Company (European front) and the 1st Marine Division (Pacific theater) in a conversation revealing their experiences after World War II. Organized in a four-act structure, the documentary captures how these veterans re-acclimated back to life after being at war and the transitions these men went through coming back home.