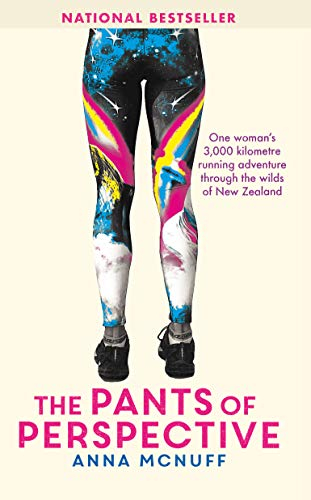 Anna was never anything like those ‘real’ runners on telly – all spindly limbs, tiny shorts and split times – but when she read about New Zealand’s 3,000-kilometre-long Te Araroa Trail, she began to wonder… perhaps being a ‘real’ runner was overrated. Maybe she could just run it anyway?

Travelling alone through New Zealand’s backcountry for 148 days, she scrambled through forests, along ridge-lines, over mountain passes, along beaches and across swollen rivers. Running up to 52 kilometres in a day, she slept wild most nights, and was taken into the homes and hearts of the kiwi people in between.

The Pants of Perspective is a witty, colourful and at times painfully raw account of a journey to the edge of what a woman believes herself to be capable of. It is a coming-of-age story which will lead you on a roller coaster ride through fear, vulnerability, courage and failure. For anyone who has ever dreamt of taking on a great challenge, but felt too afraid to begin – this story is for you.

Anna is really a guy? Is she participating in the ladies races?
23rd Nov 2019
Thanks! What an incredible women
24th Nov 2019
Imagine the smell.