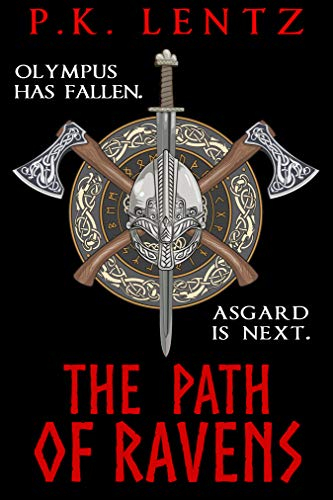 Thamoth and the other Atlanteans raised from the dead alongside him have but one purpose: to fight an unstoppable, unthinking enemy, The Myriad, which has already conquered Olympus. Their leader Ares and the witch Medea may consider the Atlanteans expendable, but Thamoth is determined to save his people and lead them to sanctuary. He will meet a silent slayer of giants and adopt her world as his own. At great personal cost, he will unlock the secrets of his forgotten past. Thamoth's journey will take him to the throne-room of Lord Odinn and down the twisted roots of the ancient World Tree Yggdrasil.

Yet there are troubling signs that the nightmarish enemy Thamoth thought he had escaped will end his second chance at life before it has even begun.

The Path of Ravens is an epic journey that borrows names and places from Norse and Greek myth while creating its own mythology, turning gods into men and women who sweat, bleed, and die to defend what is dear to them."
PostTweetShare Share with WhatsApp Share with Messenger
Community Updates
Amazon DealsAmazon discount code
New Comment SubscribeSave for later
3 Comments
18th Jun
Thanks
19th Jun
Sounds interesting, thanks abundzu🌞
19th Jun
Cheers