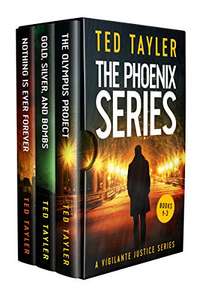 There are only so many outcomes for a man on a mission of vigilante justice.
He succeeds. He gets caught in the process. He dies.
Or he meets like-minded people who believe they must make criminals pay for their crimes
The Phoenix Series begins

The Olympus Project
Rescued by strangers from a watery grave and given a new identity.
The Phoenix is a stone-cold killer.
An ideal fit for the Olympus Project, a secret organisation fighting injustice.

Gold, Silver, and Bombs
The eyes of the world are on London 2012.
British security services anticipate an organised terror attack.
Safety is paramount. What if the real danger comes from a lone wolf?

Nothing Is Ever Forever
The action never slows. The tension never slackens.
The Phoenix stares death in the face once more.
Detectives Hounsell and Wheeler return. The past threatens to catch up with Phoenix.
PostTweetShare Share with WhatsApp Share with Messenger
Community Updates
6 Comments
Post a comment