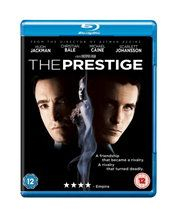 Director Christopher Nolans (MEMENTO) eclectic resume gains another interesting entry with THE PRESTIGE. Set in early 20th-century London the film centres on the bitter rivalry between two magicians who go to increasingly dangerous lengths to upstage one another. Robert Angier (Hugh Jackman X-MEN) and Alfred Bordon (Christian Bale BATMAN BEGINS) start out as apprentice magicians but when an elaborate stunt goes horribly wrong theyre driven beyond the point of reconciliation. In the years that follow Robert grows wildly jealous of Alfreds superior talents so in a last ditch attempt to gain some artistic ground he sends his beautiful assistant Olivia (Scarlett Johansson MATCH POINT) to seduce Alfred and steal his secrets. br/ While comparisons to Neil Burgers THE ILLUSIONIST are inevitable--both films are set around the same time period and both deal with suspicious attitudes towards magic--Nolans film concentrates more on the dynamic between these two characters and the rivalry that governs their every move. As the narrative twists and turns down a number of unexpected avenues the viewer is drawn into a complex world of smoke and mirrors where nothing is as it seems and no one can be trusted. Bale and Jackman perfectly execute their roles winding up the tension to an unbearable degree as they wilfully enter into some dangerously competitive patterns of behaviour. Michael Caine makes his second appearance in a Nolan film almost reprising his role of Alfred in BATMAN BEGINS by playing Cutter Jackmans mentor and Johansson pouts and flounces across the elaborate sets like a classic Hollywood screen siren. Stylistically THE PRESTIGE is full of dark gloomy imagery and a palpable sense of menace. Its not an easy film to digest but fans of intelligent cinema will be richly rewarded with a film that delivers on both style and substance.
More Detail