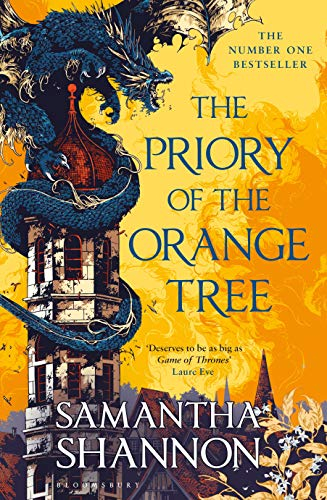 The Priory of the Orange Tree by Samantha Shannon kindle edition £1.89 @ Amazon

Kindle Edition and add Audible for £2.99
PostTweetShare Share with WhatsApp Share with Messenger
Community Updates
2nd Sep
For info, here is the blurb from the amazon page:-

A world divided. A queendom without an heir. An ancient enemy awakens.

The House of Berethnet has ruled Inys for a thousand years. Still unwed, Queen Sabran the Ninth must conceive a daughter to protect her realm from destruction – but assassins are getting closer to her door.

Ead Duryan is an outsider at court. Though she has risen to the position of lady-in-waiting, she is loyal to a hidden society of mages. Ead keeps a watchful eye on Sabran, secretly protecting her with forbidden magic.

Across the dark sea, Tané has trained to be a dragonrider since she was a child, but is forced to make a choice that could see her life unravel.

Meanwhile, the divided East and West refuse to parley, and forces of chaos are rising from their sleep.

‘The new Game of Thrones' Stylist

'Puts Samantha Shannon in the same league as Robin Hobb and George R.R. Martin. Shannon is a master of dragons' Starburst

An enthralling, epic fantasy about a world on the brink of war with dragons - and the women who must lead the fight to save it.

I have been waiting my whole life for this fantasy. It's the kind of book you never want to end. Utterly unique, wild, and rich. Sheer perfection (Lisa Lueddecke, author of A Storm of Ice and Stars)

The new Game of Thrones. Escapism at its finest - Shannon, we salute you (Stylist.co.uk)

Allow me to introduce your newest fantasy obsession . Remarkably fresh and frankly fearless . Works so well as an intricately realised and feminist fantasy that one might even be tempted to dub Samantha Shannon 'The female George R.R. Martin' . As with the best of fantasy, The Priory of the Orange Tree feels less like a book than it does an experience, a true sojourn into a rich and terrible new world (Hypable)

A magnificent epic . Crammed with subversion and feminism, and written with tough, poetic assurance (Metro)

The Priory of the Orange Tree is a brilliant, daring, and devastating jewel. Samantha Shannon has crafted an incredible world full of depth and danger, with characters I would follow to the ends of the earth. It was a privilege to read, and I'm in awe of her talent. I can't wait for the rest of the world to experience this book (Victoria Aveyard, #1 New York Times bestselling author of the Red Queen series)

Sensual . Majestic . Blending politics with high adventure and the epic with the intimate, the narrative builds like a tidal wave before sweeping towards an awesome, climactic finale (Daily Mail)

An entirely fresh and addicting tale . A celebration of fantasy that melds modern ideology with classic tropes. More of these dragons, please (Kirkus Reviews, starred review)

A masterpiece of intricate world-building with the depth, complexity, heart and soul of a timelessly relevant classic. Brilliant, diverse, feminist, subversive, thought-provoking and masterfully told, The Priory of the Orange Tree is epic fantasy at its finest. The scope of the book is staggering, as is Shannon's deft command of language ... An absolute must-read (Karen Marie Moning, #1 New York Times bestselling author of the Highlander and Fever series)

Nothing short of extraordinary. An audacious, ambitious, sprawling epic, set across a world like no other, The Priory of the Orange Tree takes everything you think you know about high fantasy, rips it apart and remakes it ... Nothing short of game-changing ... An absolute masterclass in story telling, from one of the most exciting and innovative fantasy writers alive today. With it, Samantha Shannon has set the bar stratospherically high. This is the book of 2019 (Melinda Salisbury, author of The Sin-Eater’s Daughter) --This text refers to an alternate kindle_edition edition.
About the AuthorSamantha Shannon is the New York Times and Sunday Times bestselling author of The Bone Season series. Her work has been translated into twenty-six languages. This is her fourth novel and her first outside of The Bone Season series. She lives in London.
Amazon DealsAmazon discount code
New Comment SubscribeSave for later
3 Comments
2nd Sep
Really good book!
2nd Sep
Heat added. The reviews are high praise. Thanks for posting.
2nd Sep
Really good book