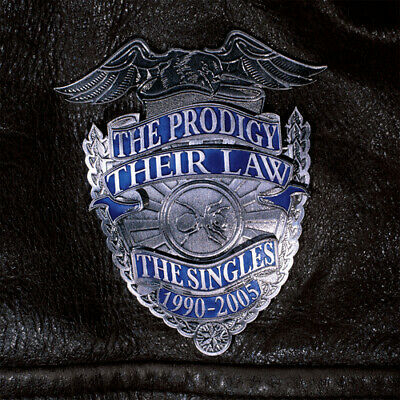 Since their formation in 1990 The Prodigy have released four albums, numerous singles, been Number 1 in 27 countries simultaneously with their incomparable Fat Of The Land masterpiece (still one of the fastest selling albums of all time), toured the world with their incendiary live show, made groundbreaking videos, shaken things up musically and socially and been unafraid to court controversy. And theyve always done it in their own formidable way, as highlighted on Their Law The Singles 1990-2005.
PostTweetShare Share with WhatsApp Share with Messenger
Community Updates
EBay DealsEBay Discount Codes
New Comment SubscribeSave for later
Top comments
5th Sep
This is no good for me.
5th Sep
ebay.co.uk/itm…588

This is no good for me.

You’re no good for me
5th Sep

This is no good for me.

Extra 23p for a second cd ?
6th Sep
Not enough heat yet to start a fire 🔥
6th Sep
Great album, sadly bought all of these on first time around so won't be needing this, heat anyway.
6th Sep
Proper hard dance music never to be equalled.

There was some great stuff about but Prodigy topped it all in the 90's and still does.

The Led Zeppelin of its genre.

The second CD worth the money,it has some unreleased songs and that awesome Voodoo people remix by Pendulum...
6th Sep

Well I never listen to the radio and I own all the prodigy albums,so I don't have that problem but yeah,the original is better...
6th Sep
RIP Keith ledger
6th Sep
The Prodigy - You will be under my wheels
NFSMW 2005