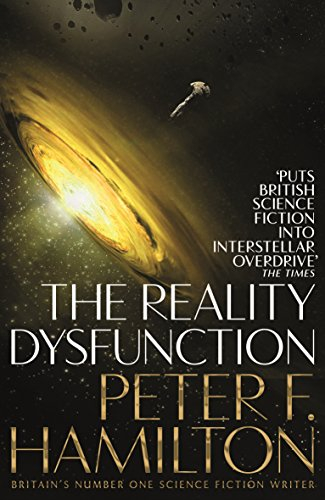 The Reality Dysfunction by Peter F. Hamilton is the first in a sweeping galactic trilogy, The Night's Dawn trilogy, from the master of space opera.

Then something goes catastrophically wrong. On a primitive colony planet, a renegade criminal encounters an utterly alien entity. And this unintended meeting triggers the release of those that should never see the light, threatening everything we’ve become. An extinct race named this phenomenon 'the Reality Dysfunction'. It is a nightmare that has haunted us since the dawn of time.

The Reality Dysfunction is followed by The Neutronium Alchemist and The Naked God.

It's a very good book if you are a fan of scifi.
PostTweetShare Share with WhatsApp Share with Messenger
Community Updates
Amazon DealsAmazon discount code
New Comment Subscribe Save for later
14 Comments
9th Jan
Serious vfm per page 😁
9th Jan
Super hot deal!
if you like your sci-fi reading, you’ll love Peter F Hamilton’s commonwealth books,
how would humans cope if there were an afterlife!
how would they cope if it weren’t very nice!
careful though, his books rarely go on discount and they’re addictive :-)

...disclaimer, I started reading all of his books again back in November. I’m just about to finish the Evolutionary Void which is the last of another three part series! Different universe / commonwealth u iverse

The void trilogy is excellent.
I've been reading him since mindstar rising and haven't once been disappointed.
9th Jan
yep, very good value entertainment.
Edited by: "Muzzzzzzz" 9th Jan
9th Jan
My favourite series of syfy books. It's Big though so only get it if you can keep track of 50 characters in 10 different stories ‌
9th Jan
This is one of my fav sci-fi book series, big in scope. Would be really good as a tv show if they could keep true to the books.
9th Jan
I'm scared to read the Night's Dawn Trilogy. After reading the Commonwealth Saga, Void Trilogy and Chronicle of the Fallers I felt compelled to seek out the Limited Numbered Editions of each book - Cost an absolute fortune, but got there about 2 years after starting. Thankfully, there's no Limited Editions of the Salvation Sequence! Misspent Youth and Manhattan in Reverse are great additions to the Commonwealth Saga too, if you haven't read them!
Edited by: "M3NDEREZ" 9th Jan
9th Jan
Cheers Op! Grabbed a copy
Always enjoyed his books, including Great North Road which no one has mentioned yet
9th Jan
Read a few of his now (inc this) and going to start making my way through the rest ASAP.

Definitely an author that you have to persevere with, I usually listen to audiobooks and it probably takes a few hours before you’re engaged but a couple more hours then you’re hooked and sneaking off for every second until you get to the end! His books make for good second time reading as you always pick up more detail so are great value!
9th Jan

Would be fine if you were Ozzie rich.
Edited by: "CoeK" 9th Jan
9th Jan
Read the short story Footvote. I would do that if i could.
9th Jan
Just finishing this, last chapter or so, bought it off a deal here a while back. Really thoroughly enjoyed. Pretty high scifi, all sorts of random ideas, good world building, definitely recommend.
9th Jan
I liked this series, but it isn't one of my favorites. Its pretty grand in scope and has some weird ideas and twists and tons of different arcs and I'm a little less than thrilled with the male fantasy lead character stuff, but it's all still intriguing stuff.

Just be prepared it's basically like 3500 pages long for the whole trilogy. Value-wise, it's great, but in terms of the time required, it's definitely not the first deep space sci-fi series I'd recommend.

Still, voted hot, cuz it's a great deal to get into this.
Edited by: "Seanspeed" 9th Jan