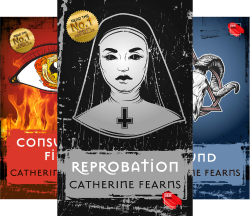 From Book 1: Are you one of the elect?

Dr. Helen Hope is a lecturer in eschatology – the study of death, judgement, and the destiny of humankind. She is also a Calvinist nun, her life devoted to atoning for a secret crime.

When a body is found crucified on a Liverpool beach, she forms an unlikely alliance with suspect Mikko Kristensen, lead guitarist in death metal band Total Depravity. Together, they go on the trail of a rogue geneticist who they believe holds the key – not just to the murder, but to something much darker.

Also on the trail is cynical Scouse detective Darren Swift. In his first murder case, he must confront his own lack of faith as a series of horrific crimes drag the city of two cathedrals to the gates of hell.
PostTweetShare Share with WhatsApp Share with Messenger
Community Updates
Amazon DealsAmazon discount code
New Comment Subscribe Save for later
2 Comments
9th Feb
Heat
9th Feb
Hmmmmmmm :/