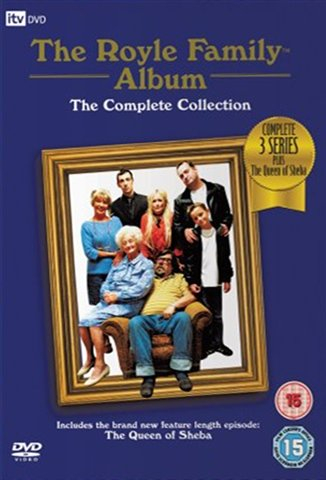 The Royle Family: The Complete Series 1-3 with The Queen of Sheba (PreOwned DVD) 75p @ CeX

Hard to go wrong for less then a quid here, please check stocks at your local stores. The closest I could find is at MusicMagpie.

Description
All three series of Caroline Aherne's acclaimed sitcom, including the 1999 and 2000 Christmas Specials, plus the BAFTA-winning feature length episode, 'The Queen of Sheba'. In series one we are introduced to the domestic conflicts of the Liverpudlian Royle clan, with Aherne as Denise, daughter of Jim (Ricky Tomlinson) and Barbara (Sue Johnston), and soon-to-be-wed-to boyfriend, Dave (Craig Cash).

In the second series Denise has now married Dave, but the Royle family sofa is no less crowded for that.

The third series sees the addition of Denise and Dave's first child, Baby David, which brings its share of new trials and tribulations to the semi-inert world of now-grandparents, Jim and Barbara. In 'The Queen of Sheba', Denise and the rest of the clan return to the sofa for a one-off episode.

Hope it helps someone.
PostTweetShare Share with WhatsApp Share with Messenger
Community Updates
CeX Deals
If you click through or buy, retailers may pay hotukdeals some money, but this never affects which deals get posted. Find more info in our FAQs and About Us page.
New Comment Subscribe Save for later
Top comments
18th Nov 2019

You won't spend a better 75p

But for £0.75 one time payment, you can own it in perpetuity.
18th Nov 2019
i am ashamed to say I scoffed at this when it first came on but then watched it after a friend recommmended and it quickly became one of my all tie favourites. so much comedy, 95% of it based in one room. exceptional comedy writing
18th Nov 2019
The Queen of Sheba is one of my all time favourite bits of TV. Such a funny show taking you through the process of bereavement. It’s outstandingly well written.
Such a huge loss is Caroline Aherne.
20th Nov 2019
seems to have doubled in price now... £1.50
7th Dec 2019
Now £1:50