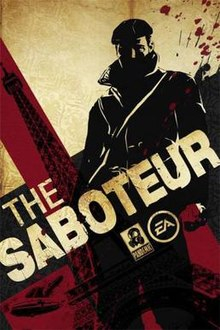 Back down to the cheapest price its been, well worth it at this point.

Description
Avenge the loss of your loved ones by hunting down your sworn enemies in Nazi-occupied Paris. Fight, climb, and race your way through this unique world to destroy the lives of those that have taken everything from you. For the first time ever in a video game, enter the seedy world of a saboteur living in a stylized 1940s Paris, where the women are sexy, the missions are epic, and the revenge is satisfying.

Welcome to Nazi-occupied Paris, a unique open world where you are The Saboteur. Play as Sean Devlin, a street-tough Irish racing mechanic seeking personal redemption on a Nazi officer that has taken everything away from him. Now, it’s time for payback - with the help of the French Resistance, British intelligence, an arsenal of weaponry, and your own street smarts and brawn, you must exact revenge on those who aimed to destroy your life. Motivated by retribution and armed with tactics of sabotage, blow up zeppelins, derail trains, implode bridges, destroy armored tanks, and level enemy facilities in the name of vengeance, in the first open-world action game set in Nazi-occupied Europe.

Hope it helps someone.
PostTweetShare Share with WhatsApp Share with Messenger
Community Updates
Origin (EA Store) DealsOrigin (EA Store) promo codes
If you click through or buy, retailers may pay hotukdeals some money, but this never affects which deals get posted. Find more info in our FAQs and About Us page.
New Comment Subscribe Save for later
Top comments
30th Nov 2019
Underrated game!
30th Nov 2019
Origin version is not fixed. There are resolution and map problems - pcgamingwiki.com/wik…eur

GOG version is fixed and I recommend getting that one gog.com/gam…eur
30th Nov 2019
Loved this on the console, well worth it if you have never played it
30th Nov 2019
Wish they would make a sequel.
30 Comments
30th Nov 2019
Underrated game!
30th Nov 2019
Origin version is not fixed. There are resolution and map problems - pcgamingwiki.com/wik…eur

Thought it was more Mafia/Medal Of Honor Frontline mix so to speak. Great game. Has some brilliant elements in it too like it being set in black and white until you rid the threat in that area if I remember right
30th Nov 2019
Awesome game..Always hoped it come to BC on Xbox.
30th Nov 2019
Should I add this to my backlog of games I've never played? It's cheap enough?
30th Nov 2019

You’d get your money’s worth for the proce
1st Dec 2019
Just started this on the PS3 last week, pretty much addicted to it.
It still looks good and a few years of playing current gen hasn't altered the enjoyment/quality of this last gen game.
There is a serious amount of non campaign stuff in it which is more impressive than annoying, I've accepted I'm not going to 100% it but it's still fun to blow up nazi watchtowers.
It reminds me of True Crime Streets of LA mixed with what Rockstar were doing in their games on the last gen.
Climbing mechanics are sketchy and it can be buggy but experienced nothing to force a restart or load last save.
1st Dec 2019
Great game if you don’t already own it!
1st Dec 2019
Loved this game on ps3 and 360. I preferred it to other similar games.
1st Dec 2019

Wish they would make a sequel.

Me too but EA shut down Pandemic Studios not long after the game came out. They had made the original two battlefront games, destroy all humans 1 and 2 plus Mercenaries 1 and 2. Really good stuff.
1st Dec 2019
This game from orgin wont start on win 10 I bought it and find out you have to crack it and play a bit with config file to make it run... heh but it is working now.
Edited by: "j0bes" 1st Dec 2019
1st Dec 2019

I thought it is an Xbox only game :/

Underdeveloped, that's why. I remember at release it spent weeks not even running on ATi hardware, and even after patching it was still a bug ridden game.
Great fun though. I remember watching a friend play it through Xfire and being blown away.
2nd Dec 2019

I think so I don't remember might download it I didn't finish
2nd Dec 2019
What a game!
3rd Dec 2019
I recall one bug that was actually advantageous on consoles. Once you reach the end of the game you go up in an elevator. Instead of getting out at the top to face the end boss just take it back down. Every enemy is completely still. They wont attack you and you can move freely to mop up any propaganda you didn't destroy. Then when fully done finish the game
Edited by: "stingersplash" 3rd Dec 2019
3rd Dec 2019
Cold, as it was stated before, this version is broken. It does not play well at all on pc and the resolution is set to somewhere in the Wii standard of visuals. In other words, it looks like crap. The GoG version is great though.
4th Dec 2019
The games a masterpiece in my mind, but as others have said the origin version is broken id go for it on console or GOG instead!
18th Dec 2019
I got a USED copy from Cex PS3 £1.50 last w/e.