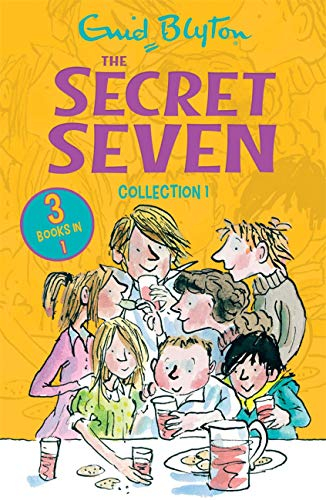 Famous Five Books 13-15 are also available at this price HERE!

Book 1: The Secret Seven (first published in 1949)
It's their first adventure and the Secret Seven super-sleuths are already on the trail of a mystery! The gang are dressed in disguise, following a lead to a spooky old house in the snow...

Book 2: Secret Seven Adventure (first published in 1950)
When a priceless pearl necklace goes missing the Secret Seven are first off the mark to catch the thief! Why? Because they saw him making his escape! Now all they have to do is find the necklace ...

Book 3: Well Done, Secret Seven (first published in 1951)
The Secret Seven have a new meeting place - a treehouse! But someone else is using it too. The gang are furious, but then they learn the intruder is in big trouble and needs their help. Can the Seven come to the rescue?
PostTweetShare Share with WhatsApp Share with Messenger
Community Updates
Post a comment