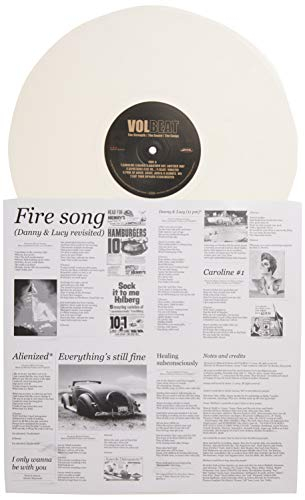 The Strength / The Sound / The Songs (Colored Vinyl) Artist: Volbeat Format: LP Release Date: 3/26/2021 LABEL: Mascot UPC: 810020502671 GENRE: Rock RELEASE DATE: 3/26/2021 PRODUCT ID: MAOT2671.1 LAST * DATE: 3/26/2021 DESCRIPTION Limited 15th Anniversary glow in the dark vinyl LP pressing of Volbeat's debut album, The Strength / The Sound / The Songs. The Strength/The Sound/The Songs was first released by Mascot Records in 2005, launching the band onto the greater European music stage with bone-shaking performances at Roskilde, Download and Pinkpop Festivals. The album, which includes their first single, a cover of Dusty Springfield's "I Only Wanna Be With You" and fan favorites "Pool of Booze, Booze, Booza" and "Soulweeper," crashed into the Danish charts and earned the band a slew of Danish Music Awards. The album has gone on to be certified 2 x Platinum in their home country, Gold in Germany and has generated over 180 million streams and (still) counting. This new limited vinyl variant celebrate both the legacy of the album and the future that will bring countless more performances of these songs to the world stage. Credits Artist(s) Volbeat
PostTweetShare Share with WhatsApp Share with Messenger
Community Updates
2 Comments
Post a comment