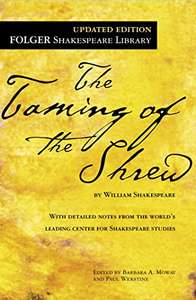 The Taming of the Shrew is a comedy by William Shakespeare, believed to have been written between 1590 and 1592.The play begins with a framing device, often referred to as the induction, in which a mischievous nobleman tricks a drunken tinker named Christopher Sly into believing he is actually a nobleman himself. The nobleman then has the play performed for Sly's diversion.


Biography
William Shakespeare was an English poet and playwright, widely regarded as the greatest writer in the English language and the world's preeminent dramatist. He is often called England's national poet and the "Bard of Avon". His surviving works, including some collaborations, consist of 38 plays, 154 sonnets, two long narrative poems, and several other poems. His plays have been translated into every major living language and are performed more often than those of any other playwright.
PostTweetShare Share with WhatsApp Share with Messenger
Community Updates
Post a comment