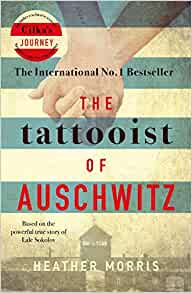 One of the best book I’ve personally read, and a steal at this price.


I tattooed a number on her arm. She tattooed her name on my heart.

In 1942, Lale Sokolov arrived in Auschwitz-Birkenau. He was given the job of tattooing the prisoners marked for survival - scratching numbers into his fellow victims’ arms in indelible ink to create what would become one of the most potent symbols of the Holocaust.

Waiting in line to be tattooed, terrified and shaking, was a young girl. For Lale - a dandy, a jack-the-lad, a bit of a chancer - it was love at first sight. And he was determined not only to survive himself, but to ensure this woman, Gita, did, too.

So begins one of the most life-affirming, courageous, unforgettable and human stories of the Holocaust: the love story of the tattooist of Auschwitz.
PostTweetShare Share with WhatsApp Share with Messenger
Community Updates
Amazon DealsAmazon discount code
New Comment Subscribe Save for later
18 Comments
9th Feb
A well written book, often unsettling which is to be expected considering the subject matter
9th Feb
Great book. Had the audible version.
9th Feb
Ordered thanks
9th Feb
Best book I've read in the last year. Loved it.
9th Feb
agree, very good book, looking to get cilkas journey next
9th Feb
google.ca/amp…tre

I went last year to the memorial centre. The scale...the horror....jesus h.
9th Feb
Whilst I agree that this is a good price for the book, I reviewed this book in January 2018 and rated it 2 stars.

For a book with less punches pulled, may I recommend, The Boy who followed his father into Auschwitz by Jeremy Dronfield which I reviewed in July 2019 and rated it 5 stars.

I do appreciate that, like everyone else, I am expressing a personal opinion and I hope you will allow me to do so.

No offence taken here. I’ll give the book a go, thanks for the recommendation!
9th Feb
Litterly just finished reading this book tonight and went on HUKD and here it is,ha. Very good book. It's easy to read and a good insight to the daily lives of the workers there. Not to painful to read for ones that struggle with the horrors that embarked there. Would love to read Cilkas story next too

It seems to be a partially true account of events, the author admits that she did make up some of the events under 'artistic licence'. Not sure how I feel about that, considering some nutcases believe the holocaust didn't happen at all.
9th Feb

…https://www.theguardian.com/books/2018/dec/07/the-tattooist-of-auschwitz-attacked-as-inauthentic-by-camp-memorial-centreIt seems to be a partially true account of events, the author admits that she did make up some of the events under 'artistic licence'. Not sure how I feel about that, considering some nutcases believe the holocaust didn't happen at all.

Was just going to say the book felt like it was fictional in some areas, and I didn't know the author admitted this. There are much better and real Holocaust books though.
Edited by: "MrSprkle" 9th Feb
10th Feb

…https://www.theguardian.com/books/2018/dec/07/the-tattooist-of-auschwitz-attacked-as-inauthentic-by-camp-memorial-centreIt seems to be a partially true account of events, the author admits that she did make up some of the events under 'artistic licence'. Not sure how I feel about that, considering some nutcases believe the holocaust didn't happen at all.

what worries me more isn't the nutcases that deny it happened , its the nutjobs that think its a criminal offence to do so, now that's power.
10th Feb

agree, very good book, looking to get cilkas journey next

I wouldn't bother most of cilka is fiction
10th Feb

Cilkas is majority made up so you don't know if any of it is true
10th Feb
Worth checking out 'If this is a man' by Primo Levi, or just about any other personal/fictional account including 'Sophie's Choice' or 'Schindler's Ark'. Impossible to read this without wondering about the state of publishing. Read two thirds and spent most of the time making notes based around how poor it is. Below par even when compared to the average Mills and Boon romance. It could be set in Disneyland......absolutely zero sense of the daily horror, brutality, stench and struggle for survival of the camps....left me wondering whether the author had rewritten a terrible attempt at romance fiction superimposing the Auschwitz story over it. The only plus is that it might inspire readers to find out more and read something far better. Try this.....please. amazon.co.uk/Thi…8-1
10th Feb

Sorry, no. The writing is atrocious. Shockingly bad.
10th Feb

Sorry, no. The writing is atrocious. Shockingly bad.