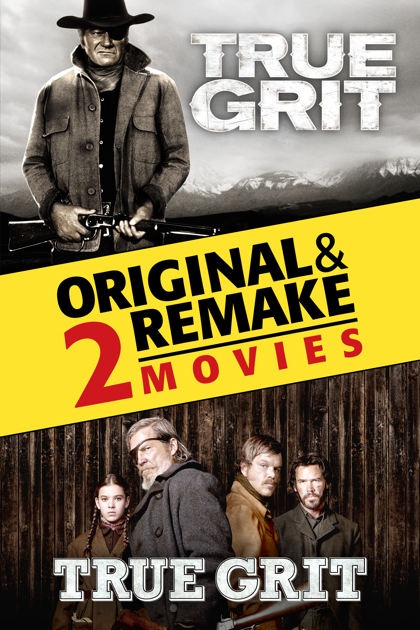 Best price on iTunes so far.

True Grit (1969)
In 1970, John Wayne earned an Academy Award for his larger-than-life performance as the drunken, uncouth and totally fearless one-eyed U.S. Marshall, Rooster Cogburn. The cantankerous Rooster is hired by a headstrong young girl (Kim Darby) to find the man who murdered her father and fled with the family savings. When Cogburn's employer insists on accompanying the old gunfighter, sparks fly. And the situation goes from troubled to disastrous when the inexperienced Texas Ranger (Glen Campbell) joins the party. Laughter and tears punctuate the wild action in this extraordinary Western which features performances by Robert Duvall and Strother Martin.

True Grit (2010)
Following the murder of her father by hired hand Tom Chaney, 14-year-old farm girl Mattie Ross sets out to capture the killer. To aid her, she hires the toughest U.S. marshal she can find, a man with "true grit," Reuben J. "Rooster" Cogburn. Mattie insists on accompanying Cogburn, whose drinking, sloth, and generally reprobate character do not augment her faith in him. Against his wishes, she joins him in his trek into the Indian Nations in search of Chaney. They are joined by Texas Ranger LaBoeuf, who wants Chaney for his own purposes. The unlikely trio find danger and surprises on the journey, and each has his or her "grit" tested.
PostTweetShare Share with WhatsApp Share with Messenger
Community Updates
ITunes Store DealsITunes Store voucher
New Comment SubscribeSave for later
5 Comments
8th Jun
The remake has the ending of the book, though i prefer the original John Wayne film, thought he was great as Rooster Cogburn! ‌ ‌ ‌ ‌
8th Jun
The remake was a catalyst for Hailee Steinfeld. Her performance was superb.
8th Jun
"Prepare to meet your maker!" Classic Cogburn! ‌ ‌ ‌ ‌
8th Jun
Both great films, not often I enjoy a remake as much as this one.
8th Jun
Fill your hands, you son of a bitch.