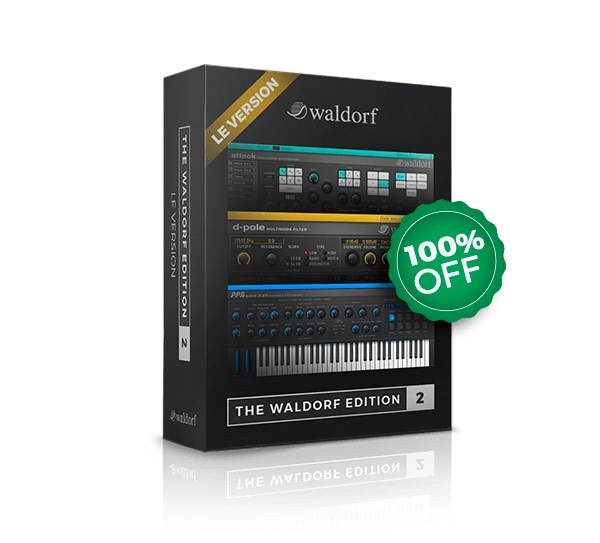 ATTACK is a percussion synthesizer powered by an almighty analogue synth sound generator. It transports the trademark sounds of classic Eighties analogue drum machines and the progressive electronic club beats of the Nineties onwards and upwards into truly 21st Century production environments.

PPG WAVE 2.V is a virtual reincarnation of its namesake cult classic, coming to prominence with the trailblazing PPG Wave series starting back in 1982. First resurrected in 1989 with the Waldorf Microwave, today it enjoys a new lease of life in virtual studios on Mac and PC computers. Classic wavetable synthesis is known for conjuring up the feisty analogue and digital hybrid sounds that have graced so many hit records over so many decades.

PS: Jump at this; it is only free for a limited time.

VALUE: $22 / 100% OFF!
PostTweetShare Share with WhatsApp Share with Messenger
Community Updates
New Comment Subscribe Save for later
8 Comments
29th Feb
Thanks!!
29th Feb
Be patient as they can take a while to respond to pretty much any form of interaction.
29th Feb

Are you referring to the sellers or the software?
29th Feb

Are you referring to the sellers or the software?

I refer to Waldorf not Audio Plugin Deals.
29th Feb
Good deal, but awful website 😁
29th Feb
Well, I dont know where its supposed to download to but I cant see it.

Anyway, here is the free code for all GIADI0PLG2UON$

and here is the web link

...but the whole thing seems a waste of time as nothing downloads
Edited by: "colombo" 29th Feb
29th Feb


Here is the link and code to download this to save others faffing about registering.