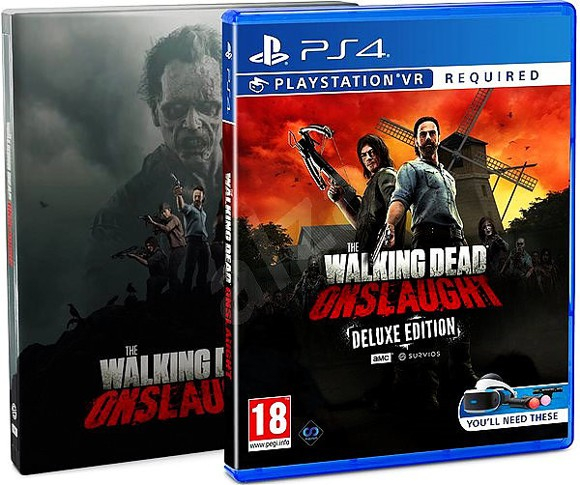 Step into the apocalyptic world of The Walking Dead with the official VR game for AMC’s global phenomenon, The Walking Dead Onslaught, and via the in games visceral Progressive Dismemberment system, experience realistic and bloody attacks against the undead.

Embark on an original story following the events of the war with the Saviors. Fight as Rick, Daryl, Michonne, and Carol to gather needed resources to rebuild the settlement, restore society, and prepare for an onslaught of walker-slaying mayhem.

Defend yourself with real-motion melee and ranged combat, and confront both the horrors and humanity of the apocalypse.
PostTweetShare Share with WhatsApp Share with Messenger
Community Updates
Coolshop Deals
New Comment SubscribeSave for later
10 Comments
8th Sep
Brilliant price
8th Sep
Is this a sequel to the walking dead psvr game?
8th Sep

Is this a sequel to the walking dead psvr game?

no, just happens to be two walking dead vr games out this year, saints and sinners was brilliant,

this one got delayed, dropped it’s co op mode and ripped off saints and sinners as much as possible, and to be fair it looks a hell of a lot better now
8th Sep
Would this be any good? I have saints and sinners but not played it yet.

Would be good if PS did a demo before hand.
Heat for the deal Joey 👌
8th Sep
Looking forward to this. Decent price. Thanks.
8th Sep
After getting the Death Stranding bug, it's so weird seeing Reedus in anything else
11th Sep
This morning I received an email cancelling the order as the game is discontinued. Anyone else got this?
11th Sep

Something seems fishy to me, it isn’t discontinued at all, it’s not even out, yet they are happy to now sell what is effectively the standard edition at a higher price


Perhaps they posted it before securing a price from their suppliers, then couldn’t get it in for a return profit. Game is not discontinued.
Doesn’t make me feel comfortable about using them in the future even if they’ve got positive reviews in trustpilot.
11th Sep

Totally get what you’re saying there