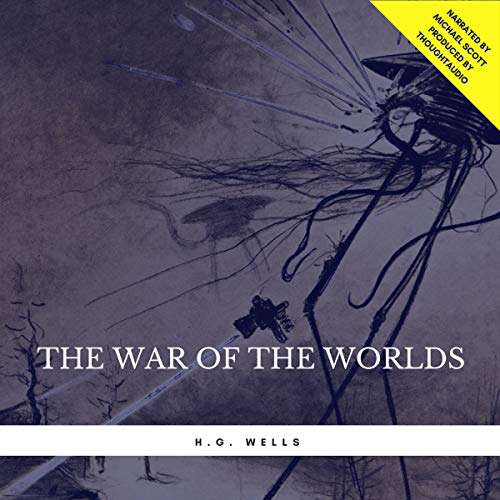 The War of the Worlds Audible Audiobook – Unabridged 6 hours and 35 minutes £1.57 at Amazon

I'm on a recurring Audible 3 month trial via TopCashBack however being a fan of classic sci-fi especially H.G. Wells I bagged the 'free' Kindle version of The War of the Worlds recently posted by Kryptonitee... hotukdeals.com/dea…499

During the purchase I noticed that it said 'Great news! You already own the Kindle edition. You can add audio for just £1.57.'

I thought the War of the Worlds (Unabridged) Audiobook running for some 6 hours 35 minutes for £1.57 was a bit of a bargain.

I'd be surprised if anyone hadn't heard of Herbert George Wells (1866 - 1946)...an English author best known for his science-fiction novels including The Time Machine,The First Men in the Moon and The Invisible Man, or at least seen a film adaptation.

But planet Earth was not only being watched - soon it would be invaded by monstrous creatures from Mars who strode about the land in great mechanical tripods, bringing death and destruction with them. What can possibly stop an invading army equipped with heat-rays and poisonous black gas, intent on wiping out the human race? This is one man's story of that incredible invasion, from the time the first Martians land near his home town, to the destruction of London. Is this the end of human life on Earth?

Some may think the English language odd but bear in mind this was written in 1897!

And it's caused quite a stir since its release, the most infamous tale being Orson Welles' radio depiction of War of the Worlds, broadcast on October 30th 1938 in the USA when upon hearing news of the invasion listeners panicked, thinking the story was real and many supposedly jumping into their cars to flee the area of the "invasion"

Now, that has to be 'one of the most outrageous news events until billionaire reality tv host becomes US President ‌ ‌

PS...Anyone finding their way here I've also posted an Audible audiobook deal today for Bram Stokers' 'Dracula'. With a running time of 15 hours and 25 minutes and costing a mere 78p I think it's a bit of a bargain! Link below;

Did you 'buy' the free Kindle version? If so, you're probably looking at the option to 'Add Audible narration to your purchase for just £2.99' in the purchase/checkout section on far right hand side of the Amazon web page.

Look back to the left side of the web page and the various formats available for purchase i.e. Kindle, Audiobook, Hardcover, Paperback etc. and you'll see the Audiobook is available for £1.57 (See below)

Thank you that worked! 🏻

Cool, I hadn't noticed that 'add Audible narration' option for £2.99 when I purchased the Audible Audiobook for £1.57. I can see it's a bit confusing as they are one of the same as far as I can tell!

So, thanks for pointing it out as it's allowed me the chance to address and clarify for others who may see it

29th Mar
Heat OP but I'm seeing quite a few posts for free Kindle ebook titles on Amazon (and some paid ones) but there are thousands of free titles all in one place. Here it is again in case you aren't aware plus a link to the Magic Catalogue.

29th Mar
This is great, I also engoyed
amazon.co.uk/Jef…09T
29th Mar
There is also a very good version available on BBC Sounds.

I already had a free copy on Kindle, and I would say I enjoyed the BBC Sounds version just as much.

The Orson Welles version is good too.