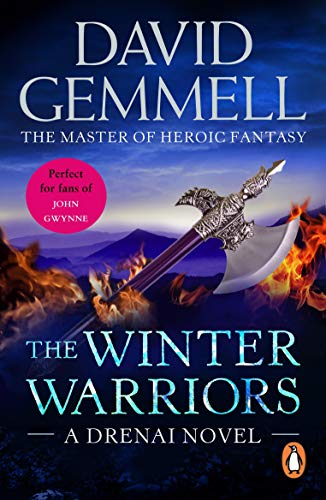 The prophecy was clear: upon the death of three kings, the world will be plunged into chaos, and all the cast-out demons of history will return to bring blood and horror to the world.

Two of the kings are dead. The third, about to be born, is hunted by the Demon Riders of the Krayakin, Lords of the Undead.

All the terrifying forces of evil range against a pregnant queen at bay in a haunted forest. But she is not alone. Three warriors stand with her, the last remnants of the once proud Drenai army. Three old men, ancient heroes, discarded by the king; Nogusta the Swordsman, Kebra the Bowman, and the hulking fighter, Bison.

The fate of empires rests on their fading skills as they journey through a tormented world on a perilous quest to save the unborn king.
PostTweetShare Share with WhatsApp Share with Messenger
Community Updates
Amazon DealsAmazon discount code
New Comment SubscribeSave for later
12 Comments
16th Sep
The Legend of Deathwalker amazon.co.uk/Leg…XVG
White Wolf - amazon.co.uk/Whi…XVG
Hero in the Shadows - amazon.co.uk/Her…XVG
All 99p
Edited by: "dogpatch" 16th Sep
16th Sep
Great author. Thanks OP
16th Sep
Got all the Gemmell books on audible, great heroic fantasy writer who is sadly no longer with us. Heat
16th Sep
How essential is it have read the previous books?
16th Sep

How essential is it have read the previous books?

Not essential. Some will refer to previous events but most can be read as standalone stories. I've just bought Winer Warriors as a standalone read.
16th Sep
Read every Gemmell novel and got to meet him once. A quiet chap, but great author. A sad loss. Waylander was my hero for a few teenage years
16th Sep
Amazing books and Druss is simply one of thw best fantasy heroes . Though the 30 were also cool . Needs a TV series .
17th Sep
I'm not a fantasy fan, but I'm currently listening to "White Knight Black Swan" by Gemmell, I guess it's Crime fiction, which I'm really enjoying, shame he never did more in that genre..
17th Sep
Great author, read all his books - really nice chap. I met him at one of his "gigs", before he passed away. He had said he'd never allow his books to be turned into film, despite many requests from his daughter. (More about he didn't want Hollywood to change what he had created to fit their plans for making money.) Small factoid, I'm sure he said Skilgannon came from a friend of his names combined "Simon Kilgannon".
17th Sep

Have said before that DG is still my favourite author, also met him at a few signings etc. But rather than every thread becoming only regret at his passing, let's encourage a few more people to read his books and celebrate them for what they are.
For me, his Drenai works are the best, particularly the earliest ones, but all 3 of these are GREAT fantasy novels.
I think White Wolf is probably the best of the 3, but for 99p they are 100% worth it. 96-98% of amazon reviews are 4/5 stars for context
17th Sep
Thanks Hokers, I got ghat one too. I'll give that a listen also.
21st Sep
Just for the record I'm re-reading White Wolf and it's outstanding, if you like the fantasy genre, I can't recommend this enough. Gemmell is by far the best author I've ever read, and I've read a lot.