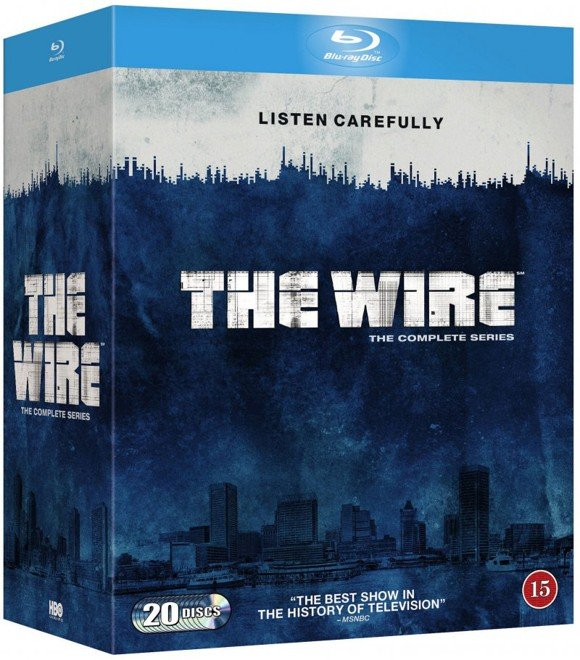 The Wire: The Complete Series (Blu-Ray) - £38.99 delivered at Coolshop

From David Simon, creator and co-writer of HBO's triple Emmy-winning mini-series ""The Corner"", this unvarnished, highly realistic series follows a single sprawling drug and murder investigation in Baltimore. Told from the point of view of both the police and their targets, the series captures a universe of subterfuge and surveillance, where easy distinctions between good and evil, and crime and punishment, are challenged at every turn. Season one introduces two major groups of characters—the Baltimore police department and a drug dealing organization run by the Barksdale family.

In this season, McNulty (Dominic West) has been demoted to harbour patrol, Daniels (Lance Reddick) is in the police archive dungeon, Prez (Jim True-Frost) is chafing in the suburbs and Greggs (Sonja Sohn) is stuck behind a desk. Meanwhile, on the docks of the Baltimore harbour, the rank and file scrounge for work and the union bosses take illegitimate measures to reinvigorate business, but a horrific discovery is about to blow the whole port inside out. While the detail is on ice, a new case begins.

Told from the point of view of both the police and their targets, The Wire captures a universe of subterfuge and surveillance, where easy distinctions between good and evil, and crime and punishment, are challenged at every turn. Season 3 introduces Baltimore's local politicians and the upstart drug dealing Stanfield organization while continuing to examine the Barksdale Organization and the Baltimore Police Department.

With the fall of Barksdale and the ascent of young Marlo Stanfield as West Baltimore's drug king, The Wire's fourth season continues to follow the money up the political ladder in the midst of a mayoral election that pits the black incumbent, Clarence Royce, against an ambitious white councilman, Tommy Carcetti.

The Wire Season 5 concludes the award-winning TV series with a bang. The bodies are piling up in Homicide, but funds for police work have been diverted to the schools. Meanwhile, business is booming on the streets as the war between East and West Baltimore’s drug kings reaches a new intensity. McNulty is drinking again. Bubs is clean again. Omar is back with a vengeance and Carcetti is struggling to make a difference as Mayor. After taking us through the streets, the docks, the corridors of power and the schools, The Wire brings us to the Baltimore media, where the successes and tragedies of all of our favourite characters become ammunition in the battle for circulation figures. 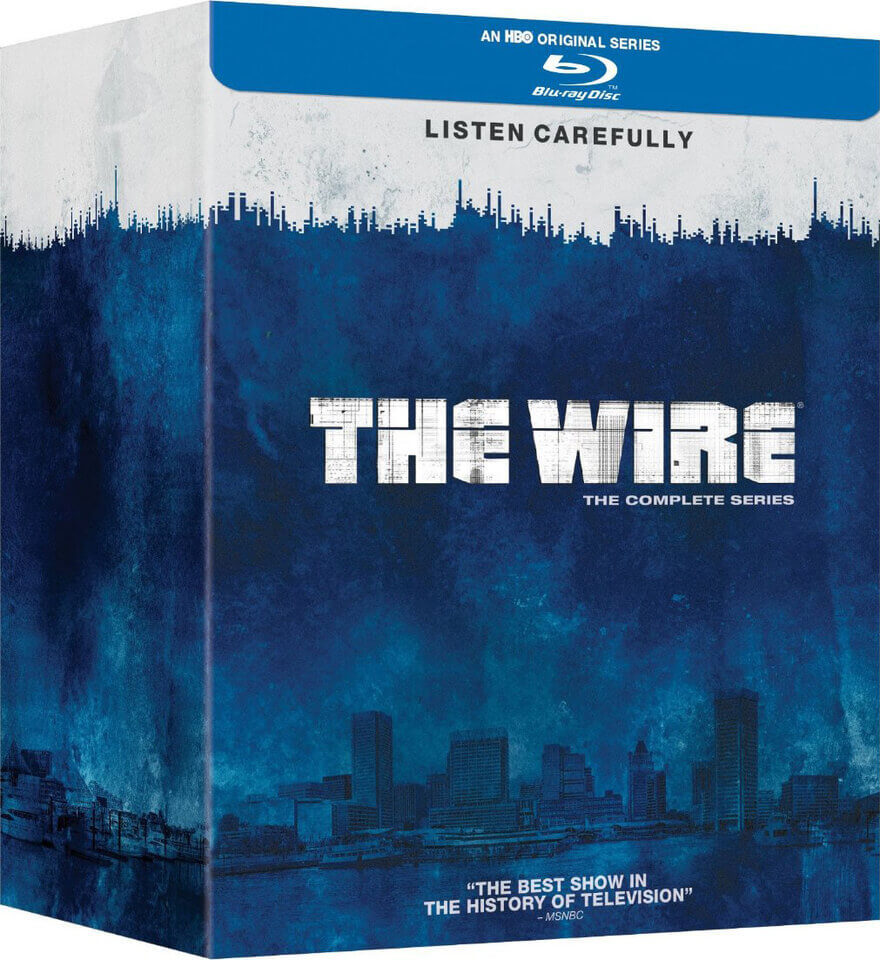 Coolshop Deals
New Comment Subscribe Save for later
Top comments
4th May
Great price. If you haven't seen this show, I envy you for being able to watch it for the first time. Sounds boring now it's said so often, but for my money this is by far the most perfect TV show ever made. Essential viewing.
5th May
The Shield is a decent series as well, along with Generation Kill

I'll be honest, I tried to start it a couple of times in the past and gave up as it was a bit of a slow burner. Once I'd finally stuck with it, the payoff was well worth it.

As sad as it sounds, I must have watched The Wire from start to finish about a dozen times now and it still doesn't get old.

If you have the time, I'd thoroughly recommend trying again.

A mate of mine raves about this series. I gave it a go and watched the first few episodes but just couldn't get in to it
90 Comments
4th May
Might as well just throw it out there, for people with NowTV, it's on there to watch as well. Well recommend by me
4th May
Great price. If you haven't seen this show, I envy you for being able to watch it for the first time. Sounds boring now it's said so often, but for my money this is by far the most perfect TV show ever made. Essential viewing.
4th May

A mate of mine raves about this series. I gave it a go and watched the first few episodes but just couldn't get in to it
4th May

I'll be honest, I tried to start it a couple of times in the past and gave up as it was a bit of a slow burner. Once I'd finally stuck with it, the payoff was well worth it.

As sad as it sounds, I must have watched The Wire from start to finish about a dozen times now and it still doesn't get old.

If you have the time, I'd thoroughly recommend trying again.
4th May

it still doesn't get old.

until Aiden Gillan (carcetti) appears and make you want to set fire to yourself rather than have to listen to whatever accent he is butchering.
4th May

Sopranos would be nearer for me if the first half of the final season wasn't so bad (well not BAD, but not up to par with the rest of the series).
4th May

I tried the first episode a few times over the years and it really didn't grab me. Then made a project of it with a friend and we got massively into it. Nearly finished season 3 now and it's been incredible. The writing, characterisation and acting is almost universally fantastic. I feel that way in spite of the intense concentration that's often required to keep up with a lot of the colloquial language, slang and just the pace of the dialogue. It's absolutely wonderful and I hope the remaining series are this good. If so it has a good chance of joining Breaking Bad, Game of Thrones (seasons 1 - 4) and Twin Peaks as one of my all-time favourites.
Edited by: "cannibalwombat" 4th May
4th May

If you have liked it up until now, wait til you start season 4. Absolutely amazing series and s4 is amazing and gut wrenching all at the same time. So underrated. Envy anyone watching it first time
5th May
Link not working for me.
5th May
I've been a bit slow to the whole netflix game and binge watching never caught me but now over time I've watched the whole of things like Six Feet Under, Rome, Band of brothers, and then more recently Breaking Bad, Better Call Saul, Peaky Blinders.

And now I've got Narcos, The Wire and The Sopranos ready to go....
5th May
Narcos is really good, Breaking Bad and Peaky Blinders are very good, but The Wire is the finest series I have ever watched. Admittedly I haven’t seen The Sopranos.
5th May
I've never seen the wire its slipped the net for some reason - gonna crack on tomorrow...excited!
5th May
This show is a step above the rest. It's so well done and realistic. Particularly like the union docks season. Watched the entire thing through about 4 times. Worth every penny at this price
Edited by: "Jesusaur" 5th May
5th May
The Shield is a decent series as well, along with Generation Kill

However, is Coolshop a reliable retailer? A quick Google search for reviews provides VERY mixed results.

I've used them twice and had no problems
5th May

It's definitely subjective but widely agreed that these 2 are considered the best whichever way you have them.
5th May
I rewatched recently. Watched season 1 blu ray version but then went back to original as the quality is a bit grittier and I think that is part of the style/appeal. There are a few discussions on this on Google-wouldnt assume just because its blu ray it's better but certainly different and if the black bars down the sides annoy you then blu ray will fix that! Always good to have an excuse to rewatch too
5th May
Sheeeeeeeeeeeeeeeeeeeet, what an amazing series. I'm a Sopranos man myself but this is a close second.
5th May

Generation Kill is superb. The Shield whilst entertaining, isn't particularly realistic.
8th May

Oh my god, so you have an agenda with Coolshop then, not just my deal
Edited by: "K_NiNe79" 8th May
8th May

Not sure how asking a genuine question equals 'an agenda'. Before I vote hot I would simply like to know that the supplier is reliable.
22nd May
what a show.

best ever
22nd May
"Breaking Bad, The Wire or The Sopranos for GREATEST SHOW EVER?"

IMHO The Handmaid's Tale is better than all of them. Like a few others on here, I just couldn't get into this though although I did really like Breaking Bad.
22nd May

Same. Watched the first 3 and wasn't immersed.
22nd May

The Wire
22nd May
Breaking Bad edges it for me, only one I've watched multiple times. Mind you, I would love to give The Wire another re-watch
22nd May
I watched the first 5 episodes and got bored with it. The comments suggest I try harder.
22nd May

Do you think Twin Peaks is accessible to a new viewer in 2020? I've seen some of Lynch's work and generally liked it - not really "enjoyed" the experiences so much as enjoyed the provocation of thought. Not sure how well a series such as Twin Peaks would hold up now though with my brain conditioned by so many fast-paced HBO & Netflix series.
22nd May
Honestly these disks are SO GOOD. We started watching the show on my girlfriends' parents' DVDs, before buying this set. The jump in quality is absolutely insane. A huge amount of care and love went into the remastering process, especially with the new aspect ratio. It's very tastefully done. This is one of those shows which you're likely to watch a few times too - well worth the plunge.
22nd May

You're forgetting breaking bad, but I'll forgive you.
22nd May

The shield is amazing! Never heard of generation kill before, but as you've watched the shield, I'll check it ot.
22nd May
David Simon’s thoughts on the HD version of The Wire here: davidsimon.com/the…os/

It wasn’t made in widescreen and the “widening” of shots can be detrimental a lot of the time. I’d pick up the cheaper DVD set in 4:3 if you want it.
22nd May
Currently all free on sky if you have it
22nd May

Absolutely. I only watched it for the first time in 2016. Just watch season 1 and see if it grabs you. It's only 8 episodes and I found it really tight, well-paced and gripping from the start. Season 1 is actually fine on its own, I think you could watch that and if you don't feel compelled to move on to season 2 (which is nearly 3 times as long and a bit protracted and disjointed) then you won't be massively missing out. That said, season 3 which came many years later (a.k.a. the Limited Event Series) is really good and you have to watch season 2 for that to make any sense.

The show is definitely not for everyone. Some of the acting is really bad and parts of the dialogue/plot hard to follow (especially season 2). That usually irritates me, but in this case it didn't. In fact it fits in the with general sense that Twin Peaks is seeped in some sort of weird other-dimensional juju that makes people behave strangely and makes the interface between time and space a bit blurred. There are so many things to love about it though (I'll resist gushing!).