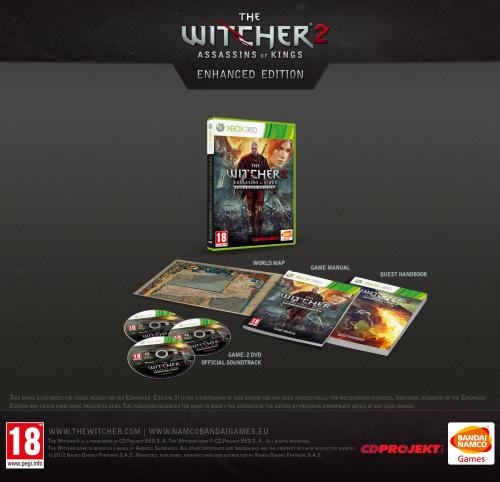 Game DVDs - The Witcher 2: Assassins of Kings game on 2 DVDs
OST CD - Audio-CD with in-game music.
World Map - A map of the game's world.
Quest Handbook - The Witcher 2 quest handbook for both novice and experienced role-playing fans.
Game Manual - A rulebook and interface explanation to help you get started.

Thanks to the new, ultra-modern REDengine, The Witcher 2: Assassins of Kings features both beautiful graphics and sophisticated in-game mechanics, drawing players into the most lively and believable world ever created in a video game. A completely immersive visual experience, The Witcher 2 on Xbox 360 is arguably the best-looking RPG ever to come to consoles.

Defining new standards for realistic, non-linear game narration, The Witcher 2 spins a mature, thought-provoking tale to produce one of the most complex and unique RPGs ever released on consoles. In addition to its epic story, the game features a complex combat system that uniquely combines dynamic action and tactical depth.

Compared to the initial award winning PC release, the Xbox 360 edition will feature lots of new and exciting content.
Additional hours of gameplay for the Xbox 360: New major adventures set in previously unseen locations, expanding the story and introducing new characters, mysteries and monsters.
New Game Introduction and cinematics: All new animations and cut scenes, including a new, three and a half minute pre-rendered cinematic depicting the assassination of King Demavend of Aedirn. BAFTA Award winner and Academy Award nominee Tomasz Baginski brings this key historical event to life, setting the stage for the story told in The Witcher 2.
Upgraded interface, designed specifically for the Xbox 360: Game camera and targeting have been redesigned for the Xbox, and with upgraded pad controls, players will now be able to experience fully The Witcher 2’s spectacular and thrilling combat.
PostTweetShare Share with WhatsApp Share with Messenger
Community Updates
Zavvi DealsZavvi Discount Codes
New Comment SubscribeSave for later
8 Comments
14th Jun 2012
What's the zavvi exclusive on this?
14th Jun 2012
Love it when the description of these enhanced editions say they include the game on discs. Like wow! I actually get the game!
14th Jun 2012
want want want want want

but cant justify, as although im bored to death of Skyrim im still playing it.
14th Jun 2012

Bored to death of Skyrim? This will be a fantastic replacement, can't recommend it highly enough
14th Jun 2012
Ordered, thanks OP - sub-£25 was what I was looking for. Very much looking forward to playing this.

Only bored in that ive now plunged about 150 hours into it and i know i need to stop playing it! i would love this, but i want it to sink a bit lower as im incredibly skint at the moment.

Not so bothered by all the bells and whistles. Just want the game.
16th Jun 2012
hot