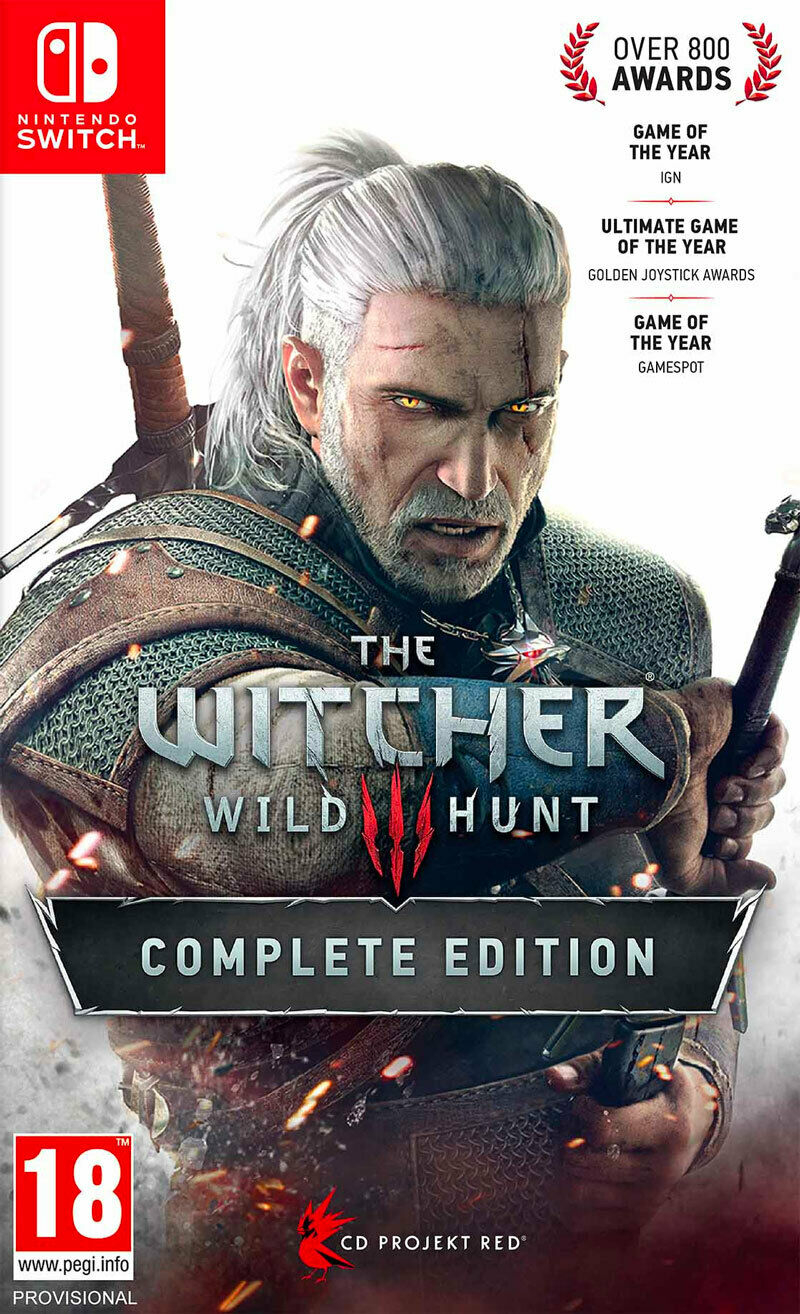 The Witcher 3 Wild Hunt Complete Edition for Switch - £37.48 delivered from the Game Collection Outlet on ebay

Yes yes, I know it's a deal with an ebay code but this comes out at least £5 or £6 cheaper than anywhere else at the moment!


Winner of over 250 Game of the Year awards, The Witcher III: Wild Hunt is a story-driven, open world adventure set in a dark fantasy universe.

You are Geralt of Rivia, mercenary monster slayer. At your disposal is every tool of the trade: razor-sharp swords, lethal mixtures, stealthy crossbows, and powerful combat magic. Before you stands a war-torn, monster-infested continent you can explore at will. Your current contract? Tracking down the Child of Prophecy, a living weapon that can alter the shape of the world.

The Complete Edition contains every piece of downloadable content released for the game, including two massive story expansions: Hearts of Stone & Blood and Wine. It's the perfect opportunity to enter this world for the first time or relive the adventure - on the go!

PostTweetShare Share with WhatsApp Share with Messenger
Community Updates
EBay DealsEBay discount code
If you click through or buy, retailers may pay hotukdeals some money, but this never affects which deals get posted. Find more info in our FAQs and About Us page.
New Comment Subscribe Save for later
Top comments
14th Oct 2019

I've had the chance to play it for the last 3 days and in all honesty it runs very well. Of course textures are scaled down but you become accustomed to it very quickly.
If you're after a pure and memorable witcher experience, you cant go wrong with this. It's very impressive
35 Comments
14th Oct 2019
Bought this earlier and the new Yakoo game on Switch using the code.
14th Oct 2019
It's a great deal as the full game is on the 32GB cart and the digital version needs a 28gb install. Plus you get all the extra physical items in the box. I normally buy digital on Switch as it makes more sense to carry around with a large memory card but this is the sort of game I make an exception for.
Edited by: "pb-live" 14th Oct 2019
14th Oct 2019

Does it run well and does the switch do it justice for a first-time playthough?
14th Oct 2019

If you care a lot about graphics, then play it elsewhere.

However, if you can accept that this is a downgraded version, albeit, an amazing feat considering the tech, play it on the Switch. It's an AMAZING EXPERIENCE.
14th Oct 2019

According to Digital Foundry, yes, considering the hardware it's great.
youtube.com/wat…9gI
14th Oct 2019

I've had the chance to play it for the last 3 days and in all honesty it runs very well. Of course textures are scaled down but you become accustomed to it very quickly.
If you're after a pure and memorable witcher experience, you cant go wrong with this. It's very impressive
14th Oct 2019
Thanks all, just what I wanted to hear!
14th Oct 2019
I've tried starting this 3 times over on Xbone, but always get distracted by life and other stuff. On my eternal pile of shame no doubt, despite the amazing reviews and feedback it gets.

Maybe the Switch version is worth a punt so I can take it with me rather than having to book sofa time. Thanks for posting OP
14th Oct 2019
Thanks OP for sharing, fantastic price for Witcher 3 with all the goodies included in box too! Amazing how they got this classic on to the Switch and fit all the content on to a 32GB cartridge! Have some heat
14th Oct 2019

I am exactly the same ps4 then xbox one the switch version I can see being completed!......hopefully!
14th Oct 2019
doh. i wasn't going to buy this but i seem to have accidentally ordered it ‌

ah well I now have it on Xbox, PS4, PC and Switch!
14th Oct 2019
Just ordered. Fantastic price for me who was in the market for it at release date. Was just checking out as my 'switch' hukd alert came through and was gonna post myself!
14th Oct 2019
Anyone not getting code accepted?
14th Oct 2019


Having it on Switch would have been great this time last year but I'm just about to get rid of my Switch as I'm not out and about anymore and have other consoles for home use. And when the TV is in use I intend to be more creative with my time instead.

Anyone else feel cheated by paying £40 plus for this? 😡 Heat op

I have been burnt many times, hence why I now no longer purchase a switch game at full price, unless it is a limited edition.
14th Oct 2019
This game will never really drop in value as its a switch game, still waiting for skyrim on switch to drop to decent price :P.

If i could ever get this sub 20 i would go for it, maybe in 3 years it will be sub 20 :P knowing nintendo :P
14th Oct 2019
I have it on PC and I can play it at 4k ultra at 60fps, but I have still ordered, just to see how well it runs, plus I have not played the DLC, bonus been that you can just start the DLC without completing the main game... I very rarely double dip, but I do know, Switch games hold their value very well.
14th Oct 2019

Agreed, sell it as like new.... Which it will be...
14th Oct 2019
Can not get this code to work for some reason =S Based in uk with uk address not used the code before but says can't be applied. Anyone else having the same issue?
14th Oct 2019

Make sure you use PayPal for payment and if you have changed your address in the past to use a non UK offer code, you might need to change that.
14th Oct 2019

If you want to play it then at this price you'd be able to play it and then sell it on ebay for £1 once you were done. The price won't go below £40. I did this recently with Fire Emblem and it cost me nothing to play the game. 70 hours for free. Truly superb.
15th Oct 2019
This is perfect!! I've always wanted to play The Witcher 3 but like what loads of other people have stated sitting down to play it has seemed like an insurmountable obstacle. But having it on the Switch makes it a more flexible experience as it is easy to pick up and put down rather than on the PS4.

Great price! Ordered.
15th Oct 2019
Best game ever
15th Oct 2019
Has the UI been tweaked? I have this on PS4 and haven't been able to get in to it. The UI is quite small and fiddly on a TV, wondering how it would translate to handheld mode
15th Oct 2019
Why am I tempted to double dip at this price on a small screen?
Massive open world games on switch don't really make sense in my opinion, but still considering buying it....
15th Oct 2019

I get that it's expensive for a 4 year old game, but for me personally it's worth it for three reasons:

1: It's arguably the best game of the last few years if not top 5 as a MINIMUM
2: With no cut backs to the main game and both DLC this is an easy 100+ hours of game, not under 10 hours like most games these days
3: I applaud them for taking the time and effort to put it on switch and optimise it for the system when so many developers can't be bothered, or worse make a hash of it, just look at what EA have done with FIFA.

It's great being able to take large open world games around with you and the developers usually enusre you gave good saves, though you can simply turn the Switch off to sleep and go back to the game.
16th Oct 2019
Hello I can't get the code to work, I've added PayPal as the payment option.
17th Oct 2019

The issue seems to be the code only works with certain sellers, I can't find another eBay one that accepts the code. Shame, as I do want to get the game.
17th Oct 2019
rover.ebay.com/rov…433
17th Oct 2019
It's relisted if my link above does not work with same seller so can get it at op post price still