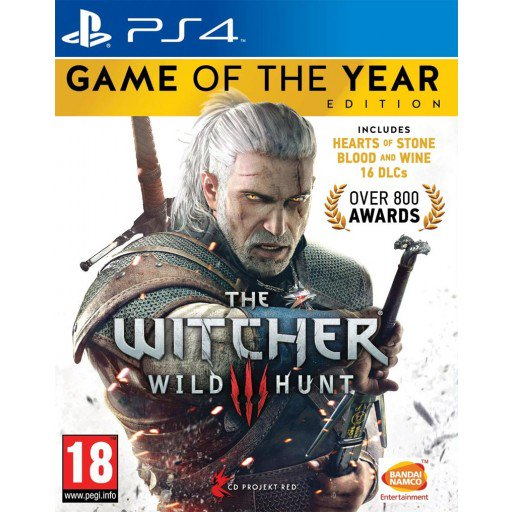 The Witcher 3: Wild Hunt is a story-driven, next-generation open world role-playing game set in a visually stunning fantasy universe full of meaningful choices and impactful consequences. In The Witcher you play as the professional monster hunter, Geralt of Rivia, tasked with finding a child of prophecy in a vast open world rich with merchant cities, viking pirate islands, dangerous mountain passes, and forgotten caverns to explore.

Winner of over 800 awards, receive the full Witcher experience with The Witcher 3: Game of the Year edition. Includes:

PostTweetShare Share with WhatsApp Share with Messenger
Community Updates
The Game Collection DealsThe Game Collection promo code
If you click through or buy, retailers may pay hotukdeals some money, but this never affects which deals get posted. Find more info in our FAQs and About Us page.
New Comment Subscribe Save for later
12 Comments
12th Jul 2019
Heard good things about this game so thought I'd give it a shot at this price, thanks OP.
12th Jul 2019
Cheers ordered, played it when it first came out but never got round to finishing.
12th Jul 2019
I've played through this game twice, i still think it is somewhat overrated. The combat system is pretty basic, 2 attack moves and a dodge, roll and a counter...telepathic AI and the game is still littered with bugs. painfully long loading times, Audio drop outs, horse vanishing, unable to swing your sword, getting stuck on scenery

The side missions are endless fetch and kill and a lot of the lore is borrowed, i mean Ragh nar Roog in this game is the end of the world, stolen from the Norse Ragnarok. Not exactly very creative.

Even the games card game Gwent is outdated and inferior to the standalone Gwent you can download.

Still to play through it twice there must be something about the game that drew you back in again for a second play through.
12th Jul 2019

Agree the combat isn't great compared to something like shadow of Mordor - which was awesome, and voice acting nowhere as good as mass effect 1/2 (in particular) /3, those Brummie accents get on my tits after a bit, but it's one of those games greater than the sum of its parts, and probably second only to grand theft auto 5 in games that have kept me hooked over a period of months.

Im 120 hours in, just done some bits around skellige and have decided to skip some of the contract and treasure hunts as they're all a bit samey and try and get through the main story. I thought I was near the end but seems like I still have a good chunk to go, plus the expansions to complete.
12th Jul 2019

yeah, looking to offload it and i didn't get round to play the DLC , when i loaded my save it complained that i didn;t have the expansions installed or something ( another bug likely ), they were installed and worked on new game but not on my save.

Overly harsh analysis, and this game isn't even normally my type of game

While combat is basic, i found it very satisfying. Being able to choose how you fight with potions/decocations and bombs i found that very engaging
I literally came across next to no bugs.
Loading times on PS4 really weren't that bad.
Audio and horse vanishing i never came across, unless you tried to call it from too far away.

Side missions did have a repetitive aspect to them but they made them all feel rewarding imo, characters were all unique and therefore it felt compelling enough while jumping back into the main story
Gwent.. again i found cool but i didn't play enough, never downloaded the standalone either so that only applies if you play it extensively i imagine

Well, someone above rated it 9/10, there has to be some balance here.

This is more my type of game, which is maybe part of the issue. My expectations are higher perhaps and It's more of an action based rpg than what I usually prefer.

i don't think i was that critical.. just that I recently revisited the game, so my memory is pretty fresh... and after recently playing the likes of Horizon, God of War and Days Gone, it was definitely a step down from those in terms of gameplay, i put it down to the game being a bit older now and maybe showing it's age.

On the first day of replaying the game, i found all of the bugs i listed above..

Horse vanished, and no amount of fast travel or meditating would bring it back, had to reload the game. Had a bug which happened when i got hit whilst deflecting an arrow back, which resulted in any attempts to swing my sword resulting in the block animation and again i needed to reload the entire game. And also had sound drop out of me, music was still playing but no diialogue or effects at all, once again needed a reboot. When you die in the game, it takes ages to load up again...which happens much more at the start, especially when the dogs seem to be able to hit you with ease and are stupidly overpowered.

These bugs i found also when i searched for them on google, so i'm unsure why these (and more) still exist given the age of this game.

There is a lot of unneccesary pervy stuff in here too, and repetition of dialogue.. for exampe when leaving the place where red baron is, the soldiers outside by the fast travel point say the exact same thing each and every time you go there, about someone getting their backside whipped... and it happens elsewhere too, just repeating the same conversations between each other... the west country and brummy accents are mostly annoying.

And as i said, the monsters and some of the games lore is just from other sources, not much if anything at all is original. Seen all these monsters, ingredients, etc before on other games

Also i;m not a fan of the monster levels done as they were, i would much prefer monsters levels to be consistent. ie... bandits being similar levels throughout the game, and larger more powerful creatures being tougher and only able to take on when you're a much higher level. But the game seems to have varying levels of all monsters... like one group of drowners being level 4 and then another group somwhere else, same size looking exactly the same being level 32 and my great monster killing witcher gets slapped down in one hit... it just doesn't make much sense. Should have been called elder drowners or something, at least i could have used my imagination even if they looked the same. It's rather lazy.

And as i said, Geralt is just so missing any charisma at all, his voice feels like he is actually an emotionless android. Yeah i'm aware he's a 'Witcher' but there needs to be some connect to the player, and not just a monotonous bore with little inflection to his voice

The game is a 7/10 for me at the absolute most being generous, it could have been better.

Gotta disagree with most of this. The combat was basic but ultimately engaging, I especially enjoying playing Ciri. The side missions felt very rewarding, I came across very few bugs, the lore, like most lore in books, films, video games etc wasn’t 100% original but that doesn’t mean it’s not creative, yes it was influenced by other stuff but it was also done incredibly well, in fact, the story and lore are what makes this such an engaging game, truly engrossing. Not really sure what your issue is with the voice acting though, especially Geralts, the voice matches the character perfectly, it wouldn’t make sense for him to be sounding overly enthusiastic or any other way for that matter.

I’m not a fan of Gwent, but I’m generally not a fan of those sort of games anyway, most people that are, the card game fanatics for example absolutely love it & the stand alone game has been well received by general audiences, critics, YouTube personalities and so on so it can’t be that bad.
13th Jul 2019

Those were pretty much my thoughts. I only played the game for 2-3 hours before giving up through boredom and getting frustrated with the horrible combat system. I don't understand the hype surrounding it at all.

To me it's just a second rate Elder Scrolls. Hopefully their next game Cyberpunk will be better.

Incidentally, most places (cex ,etc) have this for £12 second hand of that helps anyone.
Edited by: "deathhaggis" 13th Jul 2019