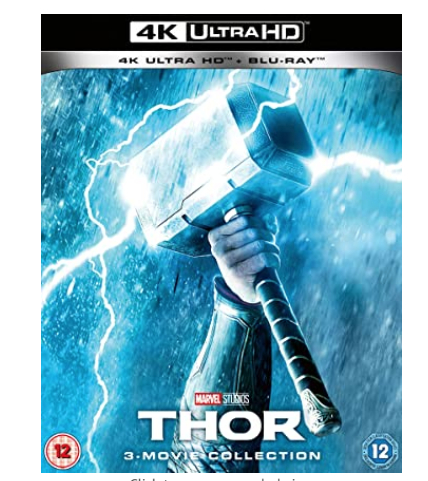 The cheapest this has ever been was £38.99, so even though Dark World is a questionable film it’s a good saving.

SYNOPSIS
Thor:
The world has many heroes…but only one is a god. When the arrogant warrior Thor (Chris Hemsworth, Star Trek) is banished to Earth from his homeworld of Asgard, he must invasion force sent to destroy him, the fallen God of Thunder mustfight to reclaim his lost powers. Pursued by an invasion force sent to destroy him, the fallen God of Thunder must rise to the battle and learn what it takes to become a true hero. Natalie Portman (Black Swan) and Anthony Hopkins (Beowulf ) also star in the blockbuster adventure critics are calling “thrilling, entertaining and cool” (Harry Knowles, Ain’t It Cool News).
Thor (The Dark World):
Worlds collide when a powerful ancient enemy threatens to plunge the cosmos into eternal darkness. Now, reunited with Jane Foster (Natalie Portman), and forced to forge an alliance with his treacherous brother Loki (Tom Hiddleston), Thor (Chris Hemsworth) embarks on a perilous personal quest to save both Earth and Asgard from destruction.
Thor Ragnarok:
In Marvel Studios’ Thor: Ragnarok, Thor, imprisoned on the other side of the universe, must race against time to get back to stop Ragnarok—the destruction of his world and the end of Asgardian civilisation at the hands of the ruthless Hela.
PostTweetShare Share with WhatsApp Share with Messenger
Community Updates
Amazon DealsAmazon discount code
New Comment SubscribeSave for later
Top comments
28th May

Disagree with every single word of this but you're of course entitled to your opinion
9 Comments
28th May
All 3 available for 9.99 each @ coolshop, if you don't mind buying as collection
28th May
I would say Ragnarok was the questionable film here. It would have have been decent if it didn't have jokes constantly shoe-horned in every 20 seconds and that's what completely ruined it for me. So glad I didn't pay to see this at the cinema. It felt like it was trying to be a comedy, pretty much what happened with The Last Jedi in the Star Wars franchise. Neither of these franchises are comedies. I mean, it's fine to have the occasional light moment here and there to reduce tension, but Ragnarok really could have done without the painful bombardment of constantly forced 'comedy'. In short, I think it's dreadful for that very reason. If I had to save this or The Last Jedi though, I'd grudgingly take this and happily watch The Last Jedi burn
28th May

That's exactly what I liked about Ragnarok that it wasn't taking itself at all seriously. By that time I was having serious fatigue with the MCU but that film was just superb and it's one of the MCU films I can watch again and again, whereas some of the others I'm not so sure on anymore
28th May

I'm actually in agreement with you on this one, although we seem to be a minority. From the opening scene of Thor spinning around in the chains I felt like I was watching a Miranda Hart sketch! Also doesn't help that I think Ruffalo is an awful Hulk. Ed Norton was so much better (in my opinion)!
28th May
Thanks for sharing, @mati2640 . Ordered.
28th May

I clocked that too, but ordered it anyway. I can wait. Ended up getting all the Thor, Captain America and Iron Man trilogies, so thanks for the heads-up!
28th May

I agree that there were too many shoe-horned in jokes, but it wasn't terrible and one or two of the characters were quite amusing (unlike Thor, who was the worst culprit for unnecessary gags.) I'd watch it again but I'm not getting the disc. It'll be something I'll spot on a streaming service somewhere after enough time has passed and think, 'why not,' rather than being something I'll go out of my way to sit down and watch.

Of the three MCU triologies discounted today it's only the Captain America set I'm seriously contemplating.