Mobile network Three have a deal on at the moment for a Sim Only with 8GB of data and unlimited texts and minutes for £8 each month on a 12 month contract.

Cracking deal if you are looking for a SIM Only with a good amount of data and Three signal is good in your area. All Three plans also include ‘Go Roam’ in 71 countries.

In 18 months the network got so bad I couldn't make phone calls. I live and work in London.

Is all the rubbish you get.

My parents left three as one night my mum could not call 999. That's how bad three is.

I left in January as my contract was up. Been with them 4 years, the last 18 months I was getting under 5mbps and phone call drop outs.

They do not care. If anyone from three looks at this site. you need to fix your broken service.
64 Comments
12th Jan
It's a shame they're so rubbish in my area. Good deal for those Three works for.
Edited by: "jg213" 12th Jan
12th Jan
Also 5g ready. This deal is going to go hot!
12th Jan
Amazing deal for a horrific service
12th Jan
Still waiting for my cashback for a similar deal I signed up for about 5 months go
12th Jan
Horrible signal and service. I had 3 contracts with them for me and kids..just terminated two and will end the third one next week...just unusable
12th Jan
£40 at quidco too....tempted.
12th Jan
I had this a week ago via mobilephonesdirect (£12 a month) and with cashback from MPD COMES TO £6 a month. Network is so terrible that every time I sent a message, it says message send failure but the other person received 3 messages of the ones which I sent. I even checked the network coverage before I buy and it shows ‘ very good coverage ‘ but on that small print it says, indoor signal may vary so that is the point that need to be considered. So my advise is before you go with THREE network , ask your friends, collègues who got 3 network. Purely out of my experience.
12th Jan
Very tempted as three is fine in my area.
12th Jan
Keep that in mind-


To qualify for cashback, you need to complete your purchase on the same visit. If you exit from the Three website once you’ve clicked through and then come back another time, it won’t register, and you’ll miss out on the cashback.
12th Jan
Be careful with topcashback as they didn’t pay my cash back. Take screen shots and order number at the time of order as it’s no confirmation email and on any correspondence from Three. Hot price but poor cash back experience.
12th Jan
If you don’t want the worry about cash back smarty (same network 30 day contract) have 30GB for a tenner, and ad added bonus of cash back as well, a few weeks ago it was £30 with TCB. Three free months of it does come in, no idea what current rates are.
Edited by: "eslick" 12th Jan
12th Jan

Hi teepot, I received an email confirmation from Three with an order reference number so maybe they have changed this since your experience. Personally I have always found TCB to be good ... it is Quidco I have had lots of problems with.
12th Jan
By contrast, I have at least 15 family and friends on Three, signal and service are excellent. Excellent prices too, self and daughter are unlimited data and text with 600m for £7.14pm, wife and MIL on 8GB with 600m for £5.12pm.

deleted2100705
12th Jan
I prefer an upfront discount, than be twiddling my thumbs waiting for cashback ..oh and actually prefer a network with actual coverage .. “ we are rolling out 5g in your area ” an area that struggles with 3g
12th Jan

can i do both quidco and top cashback
12th Jan

can i do both quidco and top cashback

Yes you can, you'll not going to get any, so doesn't matter.
12th Jan
I don't find the coverage that much different to O2. My wife can often get data (Internet access) when on O2 I can get none. We both have an iPhone 7 and also have Wi-Fi calling enabled. This is very useful at home since neither of us get a great signal inside.

I have found both with O2 and Three older Android phones always seem to perform worse than iPhones when it comes to dropouts and internet access. Maybe not an issue with newer Android phones but Wi-Fi calling is only widely available with SIM free iPhones.
So if you have an iPhone then Three is not too bad for the price.
Edited by: "HotBot" 12th Jan
12th Jan
Do not use three until they fix their services and customer service.

In 18 months the network got so bad I couldn't make phone calls. I live and work in London.

Is all the rubbish you get.

My parents left three as one night my mum could not call 999. That's how bad three is.

I left in January as my contract was up. Been with them 4 years, the last 18 months I was getting under 5mbps and phone call drop outs.

They do not care. If anyone from three looks at this site. you need to fix your broken service.
12th Jan

Strange, in particular the call to 999 since I thought those get picked up by any operator in range? Or do they go to your home network unless that's not in range?

Up in Manchester and surrounding areas three's been fine. 60/40mbps off peak, lunchtime in the city centre that drops to 5mbps, train stations and airports at peak time data access really suffers though. I did have problems for a couple of weeks as one particular cell in the city centre kept dropping calls but I raised a support ticket and it got fixed, in the meantime I used WiFi calling.
12th Jan
Great first post, thanks!
Useful sim, if you visit America, Australia/New Zealand, and a few more outside of the usual European countries. I don't actually use it in the UK, but have it for frequent trips abroad. In USA, I was connected to T-mobile most of the time, with great speeds, and no drops, and my daughter used it as a hotspot for her phone as well...excellent for sat nav, or calling home. At around £5 a month, it's a deal for me!
12th Jan

Yeah I thought the same about the 999 calls.
But as the network is so poor, they are pushing a weak signal out and your device believes it is still connected and has a service. I've had it in loads of places where I've had a full signal on 4g and I couldn't connect to the internet.

The reason why it drops at lunch times, is because people are coming out if their offices and no longer using WiFi. So the load on the network is then higher. WiFi calling and access isn't what I'm paying for, I'm paying for a cellular service.

Its a basic issue imo, they don't have enough masts and capacity. They are saying they will fix this and improve the network. And they don't or it gets pushed back.
Have a look on twitter. There are loads of people tweeting three and getting the same responses. These people are from all over the UK, and what's funny is, the people with no issues are saying it's fine for me. The ones with issues, cannot get online without WiFi.
Its crazy.
12th Jan

Me too over 4 months ago
12th Jan
I wonder how many who have serious issues with Three are using Android phones?
12th Jan

What area of the uk are you in?
12th Jan
West Midlands
12th Jan

Nothing to do with using Android, my sister had issues with Three on an iphone too. It's to do with different areas. We're in London. I had a BlackBerry with them to that received crap signal.
12th Jan

Yeah I chase Topcashback every month through Resolver, they've acknowledged click through but otherwise no joy, network is crap too in my area.
Edited by: "gazdoubleu" 12th Jan
12th Jan

As below. It's all three's network.

I've tired it on many phones, then tried another SIM in the same phones. The other Sims work fine.
12th Jan

Have the same problem. My brother thought I had lost the plot
12th Jan
Awful reception and even worse customer services !
12th Jan
This is O2 speed. And now check three in second image

SW16 area this is what I get constantly on THREE same deal as posted above for since NOVEMBER. It will say 4G+ on the top and even with full signal strength I still get around 1 Mbps on average.

Which network are you using now? I tend to find their data is slow
12th Jan
I took the risk of purchasing this deal on black Friday despite alot of people mentioning issues with signal. So far I've been with them for a couple of weeks and have excellent signal even at a hospital that I never used to get a signal bar!!
12th Jan
I just moved to O2 last week...what a difference? At last I can make a good phone call while iam sitting on the sofa. With three I used to run like mad around the house or stick my head out through window in freezing cold to be able to have a phone conversation
12th Jan
It's very hit and miss.

But if you do have an issue. You won't get any help from them
12th Jan
Three cashback?Dont waste your time it is very hit and miss had 2 paid out 2 not.Best thing is the 2 that didnt pay where Topcashback EXCLUSIVE offers lol
12th Jan
The trouble is that people don't check enough before buying contracts its not enough to go on checking Network maps they could be out of date.
The best way to find out how good a network is. is to ask friends and family or get some Pay&Go sims a lot of the network give them away free with free delivery ( has long as you phone is Unlock to any network )

Also remember that Three network will not work on a 2G mobile phone's it must be 3G/4G or 5G if you have one.

I live in Essex Near Basildon and my Three signal is very good and was with them for quite a few years and never had any problems with them or there custom service I've now switch over to Smarty which is owned by Three and if to be honest my service is even better i get signal all over my house where on three i use to have to be in my hall way but was no big thing.
Out side was really good signal....I have trouble with our normal Wifi in the house i think its the tin foil in the walls so getting a signal now on the mobile is great.
Edited by: "sdduk2" 12th Jan
12th Jan

My boyfriend & I both got the £8 a month deal a few months ago & our orders through topcashback were not recorded.
We had to raise a claim, we're still waiting for retailer to acknowledge.
Network is crap for us too 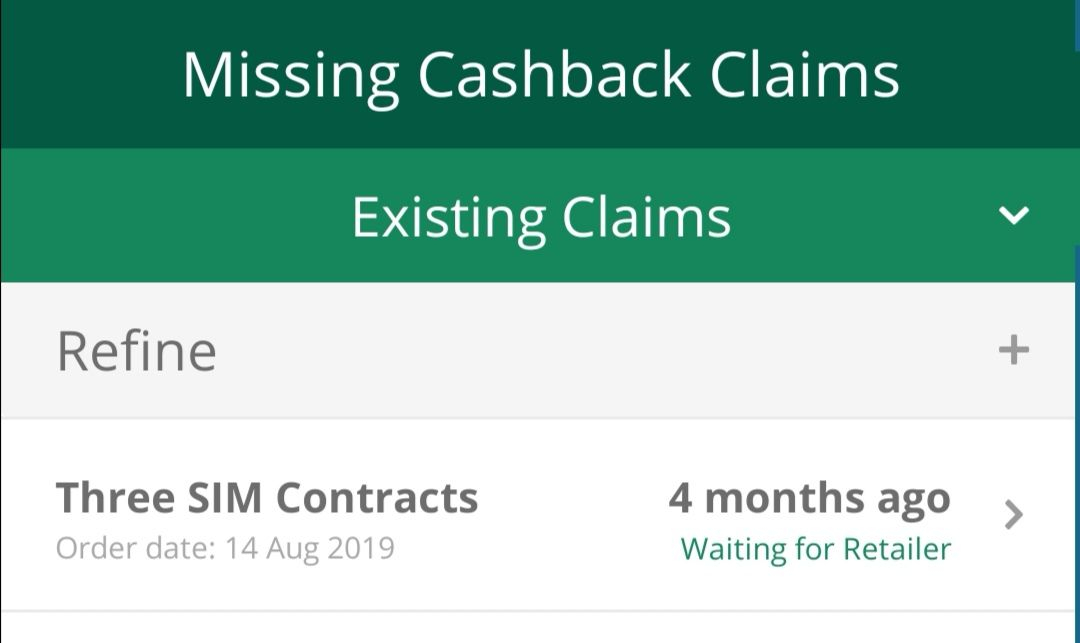