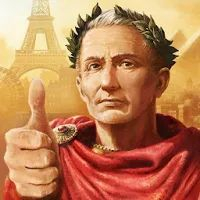 The official adaptation of Vlaada Chvátil’s strategy classic, the second best board game ever according to Board Game Geek website.

“If you are looking for civ game, this is the game! This is one of the best games of all time.” – Tom Vasel from Dice Tower

“Through the Ages is simply phenomenal.” – Drew Massey from GFB Robot

This is your chance to make history: You begin with a small tribe. As you expand your farms and mines, you lay the groundwork for technological advancements, better governments, and grand wonders. Your military might supports your political skill as you guide your civilization to greatness.

OVERVIEW:
● One of the greatest board games of all time.
● Hundreds of cards to build a mighty civilization.
● Explore the many paths to victory.
● Manage your resources carefully.

FEATURES:
● Learn the game rules with a funny and engaging tutorial.
● Compete with your friends online or on the same device.
● Defeat clever computer opponents of various skill levels.
● Play with the original board game rules or a streamlined digital version.
● Enjoy single-player Challenges requiring different strategies.

Czech Games Edition has produced over 20 board games and expansions, including many award-winning titles for enthusiastic players. Alchemists, Dungeon Lords, Tzolk'in to name just a few. We expanded into the realm of digital board games with Galaxy Trucker and now with the Through the Ages adaptation.
PostTweetShare Share with WhatsApp Share with Messenger
Community Updates
Google Play DealsGoogle Play voucher
New Comment Subscribe Save for later
9 Comments
24th Mar
Heat.
24th Mar
Regardless of price, terrible game
25th Mar

Regardless of price, terrible game

Your opinion is, obviously, completely valid for you. But with over 9000 reviews and an average rating of 4.8 (out of 5) on Google Play; if you're going to fly in the face of a pretty overwhelming favourable disposition towards the game it would be helpful if you could point out what you didn't like.

Have it on iOS years back - totally dull and painful. Monotonous would be a compliment. I fell for 7,000 positive reviews at the time. It’s like “eat poo, 5 billion trillion flies cannot be wrong” - even 99p and you’ll regret it.
Edited by: "TiscaliSurvivor" 25th Mar
25th Mar

It isn't terrible but as it's a digital adaption of a very popular board game it won't be for everyone.
I think they've done a good job of recreating the feel of the game
25th Mar
Ah, I thought it was caeser III for a minute there. Wish they would release that on Android
25th Mar

If I was a fly and 7000 of my brethren complimented the dung then I'd be silly not to wet my proboscis.

Gotta love the unwarranted arrogance of some people. Categorically telling strangers what their subjective opinion will be in the future, against overwhelming consensus.
25th Mar

I will come clean - I am not a fly. I know thar sounds arrogant. If I could give my copy away for free I would.

and talking of consensus, nice day to pop down Bondi Beach...