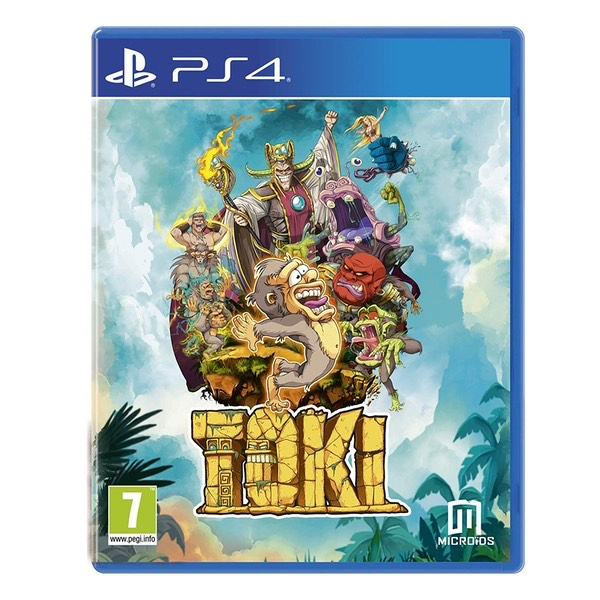 Toki sets off on a new adventure! The cult action/platform game originally released on arcade machines in 1989 is back with a super-simian new version, featuring all-new hand-drawn graphics and re-orchestrated music!

Toki the warrior lived peacefully in the jungle with his sweetheart miho. Appearing out of nowhere, the terrifying voodoo sorcerer vookimedlo and heinous demon bashtar kidnap miho and turn the poor Toki into a chimpanzee! Unfortunately for his sweetheart, he has become a hairy, lethargic ape... Rediscover Toki 30 years on: playing as Toki, explore lush environments invaded by foul creatures! The labyrinth, Neptune lake, the cave of Fire, the ice Palace, the jungle of darkness and the golden Palace are infested with vookimedlo's lackeys. Saving miho won't be easy! These despicable and terrifying beings have friendly names like boloragog, rambacha, mogulvar, zorzamoth and bashtar... And if toki's looks are anything to go by it will be no walk in the Park! You'll have to make the best of it to succeed. Luckily, Toki can walk, jump, swim, climb and spit! That's right, he uses his saliva to great Effect to dispose of his enemies….
PostTweetShare Share with WhatsApp Share with Messenger
Community Updates
365games.co.uk Deals365games.co.uk promo code
New Comment SubscribeSave for later
4 Comments
13th Jun
I loved Toki in the arcades when I was a kid.... Is this any good?
13th Jun

I loved Toki in the arcades when I was a kid.... Is this any good?

Cool, thanks for your reply. I'll wait for a sale on PSN
15th Jun
The graphics are great and if you love arcade style games with a challenge, this is the one for you.