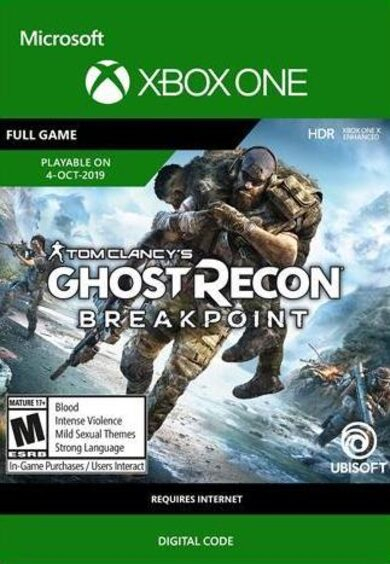 This price comes courtesy of digital key retailer Eneba, when purchased as a digital download.

Somewhere in the South Pacific lies the remote Auroa Archipelago, a vast land of that's home to Skell Technology, an enigmatic technology giant. Explore a diverse and mysterious open world ranging from barren deserts and dramatic fjords, to futurist cities and arctic peaks.

This remote Archipelago will challenge the Ghosts like never before. Use the environment to your advantage as you disappear into a jungle canopy to evade your foes, or jump into a vehicle and charge into battle by air, land and sea.

Face your deadliest enemy yet, The Wolves, former Ghosts who have betrayed their country. Led by the charismatic Colonel Cole D. Walker they have taken control of Auroa for an unknown purpose. Now in control of Auroa's powerful drone technology The Wolves and their allies will hunt you mercilessly across Auroa.

The world of Auroa can be explored either solo or along side friends with Ghost Recon's jump in jump out co-op. There are no restrictions on when teammates can join you, and all progression is maintained across the squad.

No, it isn't - not for a game that was released only a few months ago.
8th Jan

No, it isn't - not for a game that was released only a few months ago.

It’s not about when it was released but how good the game is!

And this game is not worth that much money if to believe anything that’s on internet:)
I have played demo and found it all right but would not pay more than £15 which is my bitting point;)
8th Jan

Let’s hope it happens before it hits £15 mark then!:)
8th Jan
Decent price for those who want it before it hits the £15 mark .
8th Jan
Assume this is a trustworthy site?
8th Jan

Assume this is a trustworthy site?

Indeed
8th Jan
Adds an operational free of 86p to PayPal at least for me?
8th Jan
Paid £64.99 for the gold version at launch.

Biiiiiig mistake, nowhere near as good as wild lands, boring story, boring world to play in.

It's a looter shooter where the looting makes no difference, except they want you to grind 40hrs just to play RAIDS and no one is playing them, no players left on xbox.
8th Jan
Played the beta wasn't that impressed but I loved wildlands so went ahead and purchased, couple of hours in and I'm bored silly having to return to base camp like destiny to obtain new missions which are all identical in game play and the worst thing is when you clear an area you go back and they've moved back in.... Grrrrrrr
So frustrating
8th Jan
I’ve been playing this on pc and I must admit I’m enjoying it, it’s a little slow at times but the graphics, gunplay , story are all good in my opinion.people should make up there own minds instead of listening to YouTube reviews which lets be honest get more clicks by being negative about things than being positive.
This price is a bargain
8th Jan