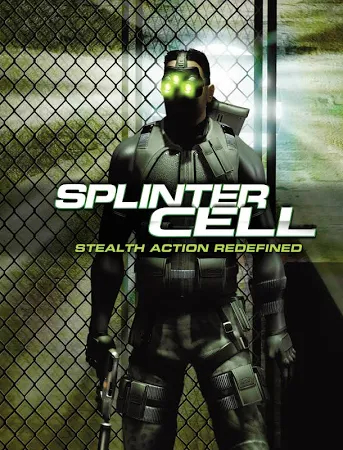 The player takes on the role of Sam Fisher, an operative for the National Security Agency's sub agency, the Third Echelon. The Third Echelon consists of many Splinter Cells. It has the support and resources of the major U.S. intelligence agencies, but will never be recognised by the U.S. government. If any cell of Third Echelon is captured or compromised the government will disavow any knowledge of its existence and the remaining members will vanish.

Fisher is inducted into the Third Echelon with an important first mission. Two CIA agents have disappeared in T'Bilisi, Georgia after investigating communications blackouts in the area. Fisher will uncover more than a couple of corpses when he infiltrates the Georgian government and unveils a threat that will have devastating consequences for the American people.

Splinter Cell is a stealth-oriented action game set in a Tom Clancy-inspired landscape. All kinds of cool high-tech gadgets are at your disposal to help you neutralise terrorist threats. Night vision, thermal vision, EM sensors, sticky cams, and other whiz-bang tech toys help you spot the bad guys, and your broad array of weapons--lethal and not--include suppressed pistols and assault rifles, sticky shock bombs, Ring-Airfoil Projectiles, and the most lethal weapon of all: Sam Fisher himself. Climb, mantle, and sneak your way through a game that won E3 2002’s “Best Action/Adventure Game” award as well as the Game Developer’s Choice Award for Excellent in Writing. With a tightly-written plot, unbeatable mechanics, and an iconic character, it’s no wonder this is the start of a long--and excellent--series.

PostTweetShare Share with WhatsApp Share with Messenger
Community Updates
GOG.com Deals
If you click through or buy, retailers may pay hotukdeals some money, but this never affects which deals get posted. Find more info in our FAQs and About Us page.
New Comment Subscribe Save for later
4 Comments
6th Dec 2019
You can often see Pirates note on some releases- "If you like it, buy it". Does buying it after 15 years still counts? Amazing game, if not best of it's kind along with old metal gear solid.
Edited by: "HavocLP" 6th Dec 2019
6th Dec 2019
Loved this game ......spent most of my uni days lost in this!
6th Dec 2019
Surprisingly decent looking after all these years. Although MGS2 holds up even better.....
6th Dec 2019

Loved this game ......spent most of my uni days lost in this!